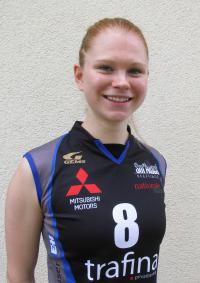 Leaving home to go to college in the U.S. was a big step for me. But looking back, it was easier than I thought. Before I could even think about saying goodbye to all of my friends, the “big day” had arrived and me and my family were heading to the airport. After a long trip I finally landed in Wichita, Kansas and my assistant coach came to pick me and another player from Serbia up.

During the first couple of days everything was just overwhelming, but I loved it from the beginning. Once we started our pre-season, I didn’t have time to think about anything else but volleyball. We practiced three times a day for two weeks before school started. That was a hard time but it was necessary because our season started one month after I arrived. This season was the most intense one I have ever experienced, but it was also one of the best. We didn’t only play our conference games inside the state of Kansas, we also travelled to four tournaments out of state. We had to travel up to 12 hours in a bus, which was pretty exhausting but also an unforgettable time with an amazing team. Our team was undefeated in our home gym, and after winning the region tournament we made it to the national tournament in Wyoming. The season was very intense but also pretty short compared to what I am used to. We were done in the middle of November and got a break from practice to focus on school and the upcoming finals. After that, everyone went home for Christmas break and I stayed with two of my teammates. From what I experienced, Americans are extremely open to meet new people, I got so many invitations to come and stay for a while during the break, I never had to worry about being homeless 😉 Once the second semester started, time was just flying. We still practiced every day, but more conditioning, lifting, and just a little bit of volleyball. I have only two more months left here in Hutch, and I am sure I will have a great end of my experience over here.

For me, this year is about more than just being away from home, learning the language and play volleyball. It is about living a whole new lifestyle, living with other people at the same age from a lot of different places, experiencing the feeling of playing in front of an incredibly supportive home crowd, and making friends and memories I will never forget. So if you get the opportunity, all I can say is: do it! Take the risk and see what is waiting for you, because every second is worth it.