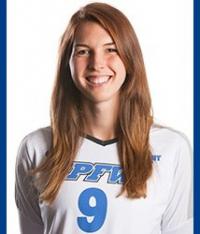 Accepting a scholarship at Indiana-University-Purdue Fort Wayne was one of the best decisions I have ever made. But first things first:

I was enrolled at a German university when it was time to for me to think about where and how to spend my semester abroad. I enjoyed playing volleyball for a club that competed in the second division and somehow I got to know Sandra and her offer to help interested players to play on a collegiate level in the US. I decided to give it a shot and sent Sandra my video. Fortunately, she said that I would have a chance to receive a scholarship at an American college. After convincing my parents, the adventure began.

A lot of requirements are to be met before you can book your flight: TOEFL, application paperwork, interview for the visa etc. Sandra was a big help with everything and soon first offers by coaches were in my inbox. It was hard to decide which school I wanted to attend and which team I wanted to be part of but in the end I followed my gut instinct. I ended up being a mastodon at IPFW in Fort Wayne, Indiana.

My first trip to the US was quite a journey, I landed in Chicago and then took the train to a small town near Fort Wayne. My Coaches were waiting for me at the train station and drove me to my apartment on campus. I was terribly homesick the first night because my room felt so empty, my roommates were not there yet and my jet lag kicked in. I can assure you, you will not be homesick for long because American teams are like family! An excellent example are two juniors that picked me up the next day and drove me around so that I could buy all the essentials – towels, bedding, decoration, food etc. The day after my roommates moved in and our apartment was a huge mess for several days. Of course living together with three girls sometimes means a lot of discussions but it was the first time for everyone to live away from home so we just had to get adjusted to it. You get so close living together and playing on the same team that you will find friends for a lifetime!

Practice in the US is quite different to German practices – a lot more reps, lots of effort and competition in every second. You will get stronger than you have ever been, get mentally tough and get to experience team cohesiveness on a different level. Playing on an American team taught me a lot, not only concerning my game but also concerning communication, ambition and friendship. It was not until spring season that I got playing time but coaches trusted my blocking skills and acknowledged my improvements so I played every game.

In summer I went home to Germany for three months because I had to write my bachelor thesis. The goodbye was hard but all I could think of was going back in August. This time I flew directly into Fort Wayne and was welcomed by my roommates. Soon after my arrival we started pre-season. At one tournament in which also big schools participated I broke my school’s block record and even was ranked nationally for most blocks in a set. I was really proud when I was named to the All-tournament team for my effort.

To sum up my last season at IPFW: I was named defensive player of the week in my league twice and received a lot of trust by my coaches but it was a season of ups and downs for my team. Nevertheless, we had one of the best team chemistries I have ever experienced in my playing career and I can say that I truly found a home away from home and a second family.

Saying goodbye in December was one of the hardest things I have ever done but I am still in touch with my dons. Being a collegiate athlete at an American college is a great experience. If you are dedicated, open-minded and ready for an adventure, then go for it!