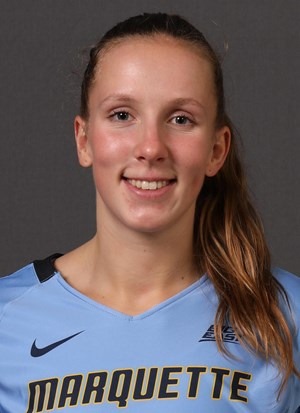 Soo where do I start?? How do I sum up a four year long, crazy, fun, unconventional adventure in just a few paragraphs. But hey, let’s give it a shot!

I will start off with some of my favorite memories that played a part in what has made this journey all worth it. Taking the step into something completely strange, new, and exciting is something I hope everyone does if they are given the chance, even if it sounds scary at first!

One of my favorite memories I have from my time in the U.S. was when we went to Hawaii with my teammates at Marquette University, for almost a full week. We swam with sea turtles, went to a Luau, sailed a catamaran and were given pineapples after every practice. The best part was defeating University of Hawaii 3-2 in front of more than 4,000 people in our first game of the season with nine new people on the team, including myself!! I had just started recovering from a surgery but was still able to contribute something to my team, which makes this memory extra special.

Another favorite memory of mine was, of course, when we went to the SWEET 16 in the NCAA tournament my senior year!! We had a great season last year and defeated no.10 ranked USC in the preseason and continued playing well the entire fall. When we found out we were going to HOST the first round of the tournament we were BEYOND excited! We played some great volleyball that weekend and beat the two teams we hosted to make it to the Sweet 16. Marquette had never hosted before and never made it to the Sweet 16 prior to this, so we made history!! Such an amazing experience I will always remember and be proud of us for!

Other memories I will forever remember are all the fun and crazy activities I experienced with my friends in America. Such as taking Halloween super seriously and dressing up every single year in crazy outfits even if it meant walking around dressed as a shark at the airport, pumpkin patch, celebrating Easter with my roommate’s family, and cruising on a boat in Milwaukee etc. In addition, I am glad I got to enjoy coconuts only 20 min from my home in Miami whenever I wanted, ULTRA music festival, Life in Color festivals and so much more.

Now let’s take a few steps back so I can explain how I got to that point. I met Sandra Brunke at different volleyball events around Sweden where she tried talking to me about going to the U.S. to get an academic degree and play volleyball. I was not easily convinced and decided very late on what I wanted to do. She helped me with all the paperwork, tests, and reminded me of everything I had not done on time, haha. Eventually I started talking to schools and when I got a call from University of Miami, it was an easy choice. A dream opportunity as they had everything I was looking for: ranked top 25 in the nation in div.1 at the time, and good academics.

Surprisingly, I was not nervous at all about leaving Sweden to start this new chapter of my life. I was thrown right into practices twice a day, living with people from three different countries, and learning new things on court. The first six months were tough, not gonna lie, and I was homesick more than I thought I would be. At University of Miami they played very different volleyball than I was used to and it took me a while to be someone my teammates could count on, on the court. After all the literal blood, sweat, and tears during fall, I was in the starting line-up in the last games of the season and in my first NCAA playoff game.

After those first six months I started reflecting on everything I had learnt that fall. Even though it sounds cliché I am going to say it: I had learnt so much about myself. I learnt how to take care of myself, my good and bad personality traits, as well as learning about new cultures, environments, and people. Living with people from three different countries gave me an experience not many people get.

After fall season everything went a lot smoother, and what else do you do in spring season in Miami if not party!! Jokes aside, we did party a bit, but we also picked up on academics, on new cultures, and got better at volleyball and a new system of playing.  (This spring is also when I concussed two of my teammates, as Sandra likes to mention 😉 )

I stayed in Miami for two years, until I decided I needed something different for my volleyball skills to develop further. After not making it to the NCAA tournament the second year as well as understanding that the coach and the volleyball system was no longer a good fit for me, I decided to transfer. Transferring was one of the toughest decisions I have had to make, and I asked myself many times if it was really worth going through more paperwork and talking to more schools. I decided it was worth it and went through with it.

This is where Sandra Brunke became my biggest supporter and helped me get to my new school. I actually do not know where I would have ended up if it was not for her. She helped spread the word about my transfer when my coach in Miami did not want to make my transfer easy for me. I am extremely thankful for her support during this time and I probably cannot thank her enough for the time and effort she put into helping me throughout this process.

As if transferring wasn’t tough enough I also got sick and had to remove a third of my kidney. The way to recovery was long but as I arrived at my new school, Marquette University in Wisconsin in the Midwest, I was allowed to start playing volleyball again. After not having played volleyball for six months, I could not have asked for a better place to be at on my way back to where I had been.

Some of you might think “How could you go from Miami to a cold town in Wisconsin?” However, that was the best decision I have ever made. Even though it was a bit colder and darker, I met so many great people I will always call my friends, I blossomed as a person, and was truly my crazy self the entire time and had so much fun along the way. In addition, I got significantly better at volleyball because of my three coaches continuously developing me and always believing in me.

Marquette was the perfect place for me. If you decide to start this kind of journey, you have to basically rank what it is you are looking for mostly before leaving. When I went to Miami I thought the location and volleyball would make me the happiest. Being in Miami made me stronger as a person, but my happy place after all was a little town called Milwaukee. In Milwaukee, the volleyball was amazing, my coaches were incredible, the culture was warm and friendly, and my friends and their families welcomed me with open arms.

I would not trade a thing because I have learnt how strong I can be when I have to, how much courage and patience is in me, how happy I am being surrounded by great and supportive friends, how to be independent. In addition I have gotten to discover so much of the world and experienced a lot of new cultures. Most importantly: I have felt so much joy. I also got to visit around 25(!!) different states in my four years in America. I have a special memory in each and every one of those places that I will always remember. I will bring these experiences with me for life and feel like no task is too big, I can do anything and everything I want.

I now have a bachelor’s degree in my hand and I have signed a professional volleyball contract in the first division in France. While I play the sport I love, I always have an education to fall back on and friends from all over the world.

I thank Sandra for making this dream come true and helping me through the most stressful and tough, but also fun parts of this journey. She has always been there for me and she is someone I could lean on with questions and concerns all four years. She is doing some great work and I appreciate her so much. Thank you Sandra and VolleyUSA!

Every step of this journey has brought me to where I am today, and that I am thankful for.