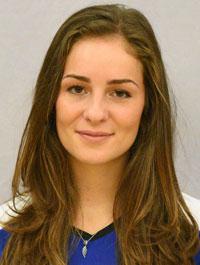 I never really knew what I wanted to do after I graduated High School and I always enjoyed playing Volleyball. When I heard from one of my teammates of the opportunity to go to the United States and to play Volleyball there, it was clear for me: that’s what I want to do! However, when I first contacted Sandra I was a little bit unsure and scared because going to the United States meant to leave behind everything I ever knew. But after skyping with Sandra I felt much better and I knew it was the right opportunity for me. I decided to make a video and I started to get offers and to get in contact with Coaches. For me it was hard to decide and to find the right college but Sandra helped me all the way and I finally found the right one that I felt very comfortable with: Lindsey Wilson College in Columbia, Kentucky. Because I made the decision in July and I had to be in Kentucky by the beginning of August everything had to move fast. But with Sandra’s help that wasn’t a problem either and I got to the College on time and well prepared.

I decided to live on campus in a dorm, which was one of the greatest experiences I made because I was super close to campus life and it was great to get the full “college-experience”. I also found my best friends in my roommates and we still are very close.

A big adjustment I had to make was to get used to the discipline and the hard work at practice. Even though I worked out a lot before I got to the United States, I wasn’t prepared for the discipline and physical stress asked from the coach. To play in the United States was very different than playing in Germany because it was connected to so much more discipline and practice than at home. However, this made the reaching of goals so much more exciting because it was connected to a lot of work and everybody was fighting for the same goal. This is why playing at Lindsey Wilson College taught me so much. I had to reach my own limits which showed me how strong I am and what I am capable of. And after so much work, at the end of both seasons that I played, we reached our goal: we became NCAA Conference Champions, we won the NCAA Conference Tournament and we play the NCAA National Tournament.

Because Lindsey Wilson College is a small college, I got the chance to get to know lots of people and everything was very personal. I felt that I was in very good hands and I also made tons of new friends. My team became my second family because we spent so much time together. I think because there wasn’t so much around, we had a special team cohesion. The girls really have grown to my heart and I can only recommend this experience. Thanks to Sandra I had the chance to play 1 ½ years in the United States and to spend one of the best times of my life there!