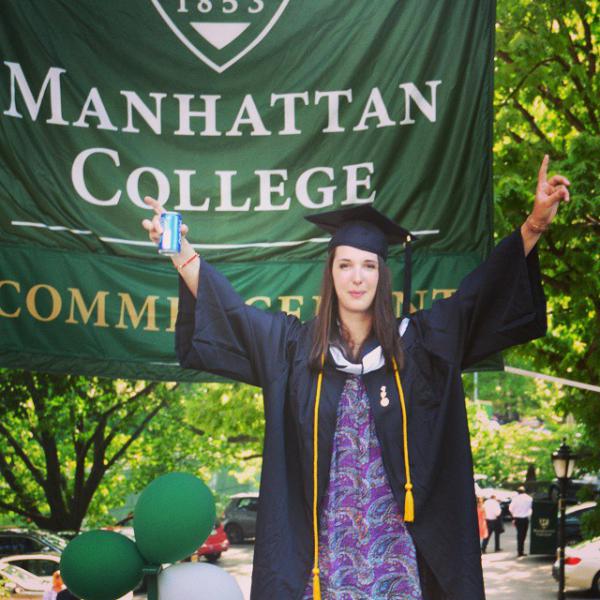 ‘Start spreading the news, I am leaving today, I want to be a part of it – New York, New York’ … and that is how the beginning of Sinatra’s famous song, that I had been listening to since I was a child, marked the beginning of my amazing time in New York. I was full of anticipation and excitement when I finally graduated from High School, because all I cared about at that point was the upcoming time with my new team in Long Island, New York. So my first stop was JFK airport, where my two coaches Kristina and Christina picked me up and drove me to Hofstra University.

The first couple of days were intense. I had to get cleared medically, adjust to the humidity, move into my dorm room, learn my way around campus, meet what felt like hundreds of new people, and get ready for pre-season, which started only a few days after my arrival. However, my coaches and teammates were incredibly helpful, and everyone made me feel at home right away. Looking back, I think it helped a lot that more than half the team was international, so everybody was kind of in the same boat. Pre-season was tough, because I was not used to practicing that many hours a day at such a high level. We played a lot faster compared to my teams in Germany, so a lot of times I felt like a beginner who had never played Volleyball in her life. Yet my coaches were very patient with me, so that I could learn their system step-by-step. Our first season went by very quickly, but I knew I was already full of excitement for the next season.

My sophomore year was a lot different than freshman year. I already knew what to expect, so I definitely felt more prepared. However, I also was not a freshman anymore, so my coaches had much higher expectations. Hofstra’s program, in general, was very intense, and our coaches always pushed us to play and maintain a consistently high level of Volleyball. We wanted to be a championship team, so we were expected to practice, live and act like one. This was very new to me in the beginning. I had been on winning teams before, but never with coaches who pushed us in such a way. With that being said, of course during season, every player has her ups and downs. There were days were I did not enjoy myself as much as I thought I would. However, it is important to look at the bigger picture. In my case, the bigger picture was getting an education and doing everything I could to help my team win a championship. We ended up entering the CAA-Tournament as a low seed, playing the hosting team in the semi-finals. It was an intense battle, but won and made it to the championship match. Playing last-year’s winner, we knew it was going to be a battle, but we won and made it to the NCAAs. All our hard work had paid off, and it was an amazing experience to be a part of that team.

However, for several reasons I decided to transfer after my sophomore year. My coaches at Hofstra as well as Sandra were very helpful in the process of finding a better fit for me. After a few weeks I knew that Manhattan College would be the perfect school academically as well as with a great Volleyball program on the rise. I took the summer off to road trip from New York to Florida, and was ready for a new experience. ‘I want to wake up in the city that doesn’t sleep – New York, New York…’ and from then on I woke up about 15 minutes from Central Park and 30 minutes from downtown Manhattan.

We had a great team at Manhattan College, but I definitely had to get used to the different setting and coaching style. Manhattan’s Volleyball program appears to be less ‘professional’ because we do not have a shiny locker room, big weight room or newly renovated Volleyball gym. Additionally, our campus was much smaller and we had a lot less students overall. Yet I immediately fell in love with the simplicity, and also with the focus on what truly matters. When you play a sport, it does not matter if you have four coaches or just one. You should not be playing for the fame or because there is a big crowd. For us, it came down to the fifteen players on our roster, our coach and the athletic trainer. We were a family, we played like a family and we were successful. At the same time, I loved that Manhattan College was a strong school academically. Our coach, Mark Jones, always told us that family comes first, then academics and then Volleyball. So he pushed us to be the best version of ourselves in the class room, on the Volleyball and in the community. I participated in a program that helped me get work experience with the United Nations Headquarters in New York, and I was able to expand my professional network. All, while also playing Volleyball at a high level.

Towards the end of my junior year, I had to experience something that every athlete fears. Two weeks before playoffs, I suffered a severe injury. I am sure most of you know that if you play a sport your whole life, injuries can be very difficult at times. There is almost always a normal emotional reaction that includes understanding all the medical information about the injury, going through surgery and finding the strength to go through rehab. During that time, my coach Mark Jones, my athletic trainers, and the team were an incredible support system for me. They made me feel like I still was a part of everything, even though I was not able to touch a Volleyball for almost eight months. I do not think I would have even stepped on the court once during my senior season, if it had not been for their support, encouragement and profound friendship. With that being said, it was a weird feeling after my senior season was officially over. I was a normal student for one semester with no obligation to practice, lift or condition. Yet, I was glad to have had the time to finish off strong academically, graduate Magna Cum Laude and to be inducted into several honor societies.

When I look back at my four years in the United States, I feel nothing but thankful. I made life-long friends, I got a degree, and I was able to play the sport that I love so much at two different Universities. Yet, most importantly, I was able to grow into the person I am today. For me, it is important to let you know that a lot can happen in four years. You will make mistakes; you will struggle; and you will grow and learn from it. For example, you might get to your University or Junior College and you find out it is not a good fit. You might get there and find it to be too intense or too easy. You might get hurt your first day of practice. You might struggle academically or get homesick. All these things can be a part of being a student athlete. It is important to understand that, but also to trust the process. Ultimately, learning begins outside of your comfort zone. Therefore, I encourage you to take the risk, get out there, apply for a scholarship and find out what adventures are out there.

‘If I can make it there, I’ll make it anywhere. New York, New York’… I miss listening to Sinatra every time we won a home game at Manhattan College. I miss my teammates, my coaches, my strength coaches, my athletic trainers, my athletic directors, my professors, my class mates, my friends – New York. In a way, you do not know what you have until it is gone. In two weeks, Hofstra as well as Manhattan College are competing for yet another chance to make it to the NCAAs. I will be following closely, wishing I could be there and help them make their dream come true.

Thank you, Sandra for always being there. Thank you for making me feel like your player and friend. You were there for me from the beginning, but also when things got difficult.

You want to live your life where things happen on a big scale? My question is, what are you waiting for?