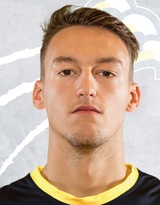 My name is Brandon Eagle and I’m a middle from Melbourne, Australia. I was an aspiring volleyball player hoping to pursue the sport a little further after high school and junior state team levels. Through a couple of friends in the volleyball scene I heard about Sandra and her work with up and coming volleyball athletes.

I reached out to Sandra a little late in the cycle but thanks to her help I got a few schools throughout North America showing some interest! Eventually, I chose Northern Alberta Institute of Technology in Edmonton, Alberta, Canada. After back and forth emailing with Doug the coach at NAIT about the team, facilities and academics, I felt that it was the right school for me. I was accepted into Business Administration with a focus in Marketing as it is a passion of mine.

I arrived in September 2017 and was immediately put to work with fitness testing the day after I landed (I was still very jet lagged!). My first season was quite challenging for me as I found it hard to adjust to living away from my friends and family back home but in saying that, my roommates where a great bunch of fun. I was living with a fellow Aussie volleyballer, a Greek basketballer and an American basketballer all playing at NAIT. Before this, I’d never been away from home longer than two weeks, so it was a pretty big adjustment. There were also two other Australians on the team which I was glad about because I could at least talk to someone about AFL and cricket! My AFL team had made finals the week after I left so I missed them win the Grand Final, their first in over 30 years. I remember watching that game in a dingy hotel about 2 hours outside of town at 1am during a tournament.

As the season went on the weather got colder and colder. I had never seen snow or been in below zero weather before in my life so moving to a place where it regularly goes below -30° was quite a shock too. On the school side of things, I was very much enjoying what I was learning. I have a business mind, so I was loving being able to apply it to my studies. NAIT operates with smaller classroom sizes which was really convenient as it allowed me to easily make friends and communicate with the teacher when I needed. My school day was pretty full on. I had classes throughout the day and then practice every night with games on Friday’s and Saturday’s. Throw in a few gym sessions and individual skill training sessions I was spending over 40 hours a week at the school.

During the season I was back forth between starting and not playing so it was important to me that I make the most of the opportunities I had. One game against the 1st team in our conference, Keyano, it was a home game and it was also Australia Day. I had trained well that week and was told I was starting. To my excitement right before the start of the game we lined up for the Canadian anthem as usual but instead the Australian anthem played! It was a nice recognition from the school which I appreciated. We ended up winning that game 3-0 and I got my first “Player of the Game” award.

At the end of the season we were sitting comfortably in 2nd in our conference and ready to take on provincial finals. Our team was star studded. Our right side was an all Canadian, our setter won the provincial award and so did both of our left sides and the other middle. Unfortunately, though with all this talent, we didn’t make it past the quarterfinals which was disappointing after such a strong season. Other than that, it was a great season where I learnt so much about volleyball and myself. I ended up staying in Edmonton for the summer where I worked as a salesman and then a gardener which was great as I was outside and making the most of the warm weather before it went cold again.

My second season was a bit of a different approach than the first season, I wasn’t a rookie anymore and I had moved into another place with just the one teammate. There was a high turnover of players this season with 9 out of 14 players being rookies to get up to scratch, being considered a leader meant that I had to pick up my game and take it a bit more seriously. It also meant that I was able to get my own two seats on the bus rather than double up like the rookies do, what a win.

This season, the athletic therapist was my best friend as I was battling repeat injuries that I couldn’t shake especially in my lower back. I didn’t realise how quickly you go from being a rookie to being old. This home and away season saw us finishing 2nd in our conference again and with NAIT hosting the provincial championships, playing on our home court with our own fans was a surreal experience. Unfortunately, we fell to our southern rivals SAIT in the quarterfinals. From there, I knew it was my time to come home.

Being able to play college was a dream of mine and it turned out to be the greatest experience of my life and by moving overseas right out of high school my personal growth was off the charts. I learnt so much about myself, my capabilities and limitations, responsibility and resiliency and I can’t recommend it enough.