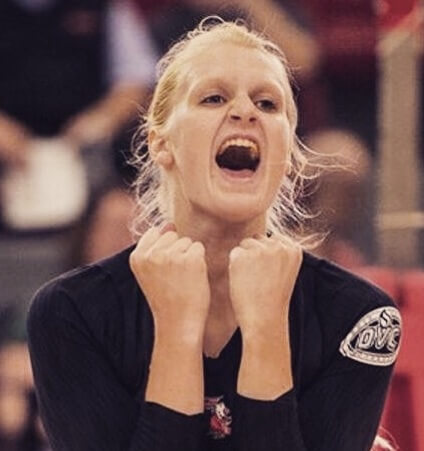 After returning to Germany from a High School year abroad in the US at age 17, my decision was made: I want to see more of this world and learn more about other places, people and cultures. At that point, I had already played Volleyball for ten years in many different leagues in Germany but the enthusiasm for Volleyball and sports in general that I had experienced in the United States was like nothing I had ever seen before. It was obvious that studying in the States was the answer to my dreams and Sandra was the one to help me realize them.

After a first skype interview with Sandra, my decision was made and before I knew it I was filling out paper work, signing up for the SAT and TOEFL test and working on all the other lovely bureaucratic things that needed to be done. I did not have a specific idea on where I wanted to go but I knew that I wanted to stay for four years and play at a Division 1 school. What felt like just a few months later, I committed to play at Jacksonville State University, a 10,000 students D1 school in Northeast Alabama. Out of all the places the US has to offer, I never thought I would end up in a small town in the Deep South. Almost all the stereotypes about the very conservative Bible Belt that you’re thinking about right now are more or less true, but little does the world know what an amazing place Alabama can be.

I arrived in Jacksonville in August of 2014 and was thrown right into it. Because of my late Abitur graduation, I had to miss the previous three weeks of physical training that all the other girls had already gone through and had the pleasure of jumping right into preseason, which is also known as hell on earth. The following two weeks we often wondered if we were here to be trained for a Special Forces Mission or to get better at Volleyball. We practiced three times a day including lifting weights and athletic training for a total of seven hours a day, not even including team meetings. But once preseason was over, things turned around quickly. I was not kidding when I said Americans love their sports. Not only did other students and locals come to support us, but families, high school teams and many others drove regularly to cheer us on and watch us play. In college sports in the US, you do not need to play like a super star to be treated like one. My team and I played good Volleyball but let’s just say there were definitely bigger and better fish in the very competitive sea of College Volleyball. However, that did not keep little kids from asking for autographs or the local newspaper to write articles about us, and that’s just the tip of the ice berg.

Playing college Volleyball is a lot of work, but it is also so rewarding in many different ways. Being able to play at a high level and with such intensity while earning at Bachelor’s degree at the same time, was probably the most decisive argument for me to study abroad. An average day during season usually started at 5:30 am with lifting weights before heading to class for a couple hours. After lunch, it was time to practice for 2,5 hours before we watched some game film. At night, the library was the place to be in order to get school work done. We usually played two to three days a week, and thus had to miss class at least one or two days every other week. Playing D1 and handling your studies and social life at the same time demands everything of you but on the other hand, you will always receive the help necessary to get it done. Not only your coaches, professors and tutors, but also the lunch ladies, locals and fans, will give you a helping hand whenever you need it.

But enough already about Volleyball. Despite spending an endless number of hours in the gym and the library, I got to see 18 amazing states and experienced many different facets of the American culture. From line dancing in the Country Music Capital of the World, climbing the Hollywood Hills in Los Angeles, celebrating Mardi Gras in New Orleans, to beautiful beaches and Latin tunes in Miami, all the way to standing on top of the world at the Rockefeller Center in New York City, the US has so much to offer and I am so grateful for everything I got to see and experience. Nevertheless, what makes America an amazing place are the people. During my four years, I had some good and some bad times, traveled with friends and traveled by myself, got homesick at times but never did I feel lonely. The support I received from teammates, friends and the community made me feel home and welcome and to me, that’s what Americans are all about: kindness and generosity.

As I sit here today, a Bachelor’s degree and the acceptance letter to my dream Master’s program in hand, I can’t help but be happy about my decision to study abroad, smile about all the memories I made and admit that I will be forever an American at heart.

Special thanks to Sandra and VolleyUSA; where you’re not just another client that will be checked off and forgotten once the scholarship papers are signed. Sandra’s first-hand experience is good for great advice in any situation and the little messages and check-ups mean so much.