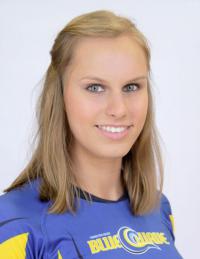 The year I started thinking about going to America to play Volleyball, I had just skipped four leagues and started playing in the German „Regionalliga“. After staying in touch with Sandra over the year I finally took a chance and sent her a video of my first game in the league. Unfortunately, at that time my performance wasn’t good enough. Half the season went by and I hadn’t spent much thought about the scholarship anymore, when I got a message from Sandra. She didn’t give up on me and pushed me to send her another video. Frankly, I didn’t expect much at that time. I had already given up on my dream. All the more I was taken by complete surprise when she admitted me into the program. That was in December.

The next half year went by in no time. At the end of July I took the plane to Jacksonville and was more excited than ever. The coach picked me up at the airport along with a girl from Austria. The first few days we had to stay at an old Lady’s house, who supported us internationals a lot during our stay. In August we were finally allowed to move into our apartments, which we shared with three of our team mates. This turned out to be a good motivation when it came to leaving for practice, that started one or two days later.

The first week, of course, everybody had sore muscles all over. We had strength training three times a week. Every day we practiced three hours in the morning and two and a half hours in the afternoon. The doubts of not being good enough, that I had had in the beginning, soon vanished when I noticed that the players were most likely on the same level. It was awesome to have two coaches, one assistant coach and a strength coach. That made practice so professional and nobody got left behind.

Three weeks later College started and along with that the tournaments and games. In those three weeks I had already learned so much. However, at the beginning the coaches didn’t let me play. I seemed to appear too unsure of myself and, unfortunately, I had to skip more than a week of practice due to an injury. I got lucky, nevertheless, and had to fill in, when one of the middles got injured. From then on, I participated in every game. It was such an unbelievable experience. Game after game I could feel the improvement. Besides, I was lucky to be on a pretty good team and we had won 22 games in a row until a team could break our streak, which made us one of the best 20 (18!) teams in the nation. Sometimes, we had to travel for three hours to get to a tournament. If it was further away, we even stayed at a hotel and had dinner together.

Our head coach has always appreciated the community and wanted everybody to get along with each other in order to be a stronger team. For that reason he organized a lot of fun activities for the team like a scavenger hunt (Schnitzeljagd) at a big outdoor shopping mall or a cooking class. After the season was over we also had an emotional Christmas party with our biggest supporters.

One highlight at the end of the season was to be host of the Florida State Championship. A big success was also to win against „Miami Dade College“ for the first time in FSCJ-history and kick them out of the tournament as the first team. My personal highlight was when I was picked by and rewarded in front of the best teams in Florida at a big championship dinner. This I will never forget.

Unfortunately, after just three months, the season was already over in November. I loved my team, it was probably the best team in which I have ever played in. I am so grateful for that great experience. I have learned how to discipline myself, never to give up no matter how you feel and not to show my insecurity to others in order to be a better player. However, personally I have never fit in with the other girls although I got along with most of them. Nothing can ever be fully perfect. That is why I will always keep the positive things in my heart and recommend everybody to experience American volleyball themselves.