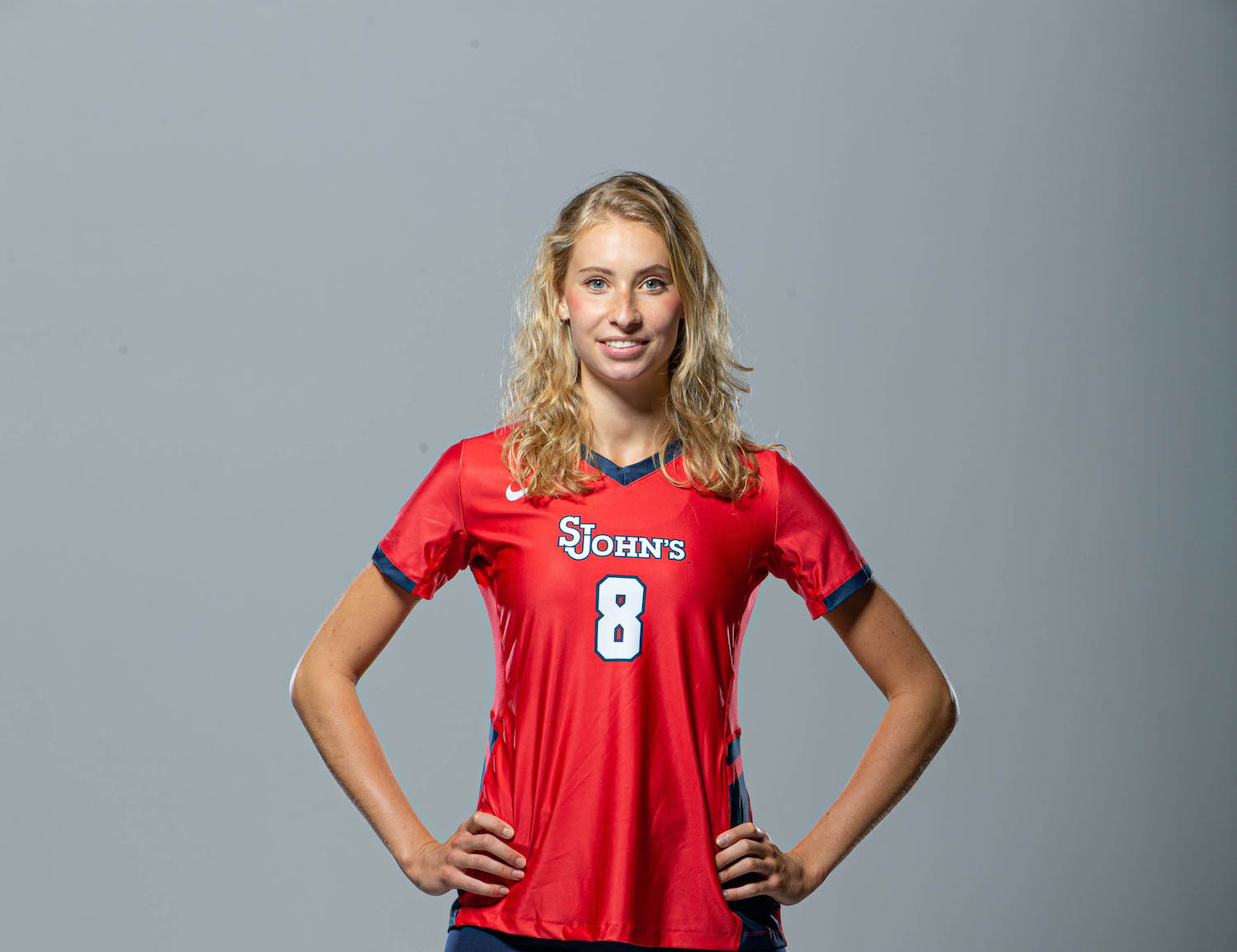 I am Hanna Wagner, a senior middle blocker from Germany. I play D1 college volleyball since August 2016 for the Red Storm of St. John’s University in Queens, New York.

When I made the decision to apply for a full collegial scholarship in the United States and signed the contract with VolleyUSA, and Sandra, I never imagined to get where I am today.

I got into conversation and contact with Sandra in May 2013. It was at the German National Championship under 18 in Berlin. One of my teammates already applied for a full athletic scholarship in the USA through Sandra and I found that a really exciting opportunity for my future as well. After talking to my parents and constantly communicating with Sandra I decided I will come out of my comfort zone and move to another country to continue playing volleyball while studying and pursuing a Bachelor’s degree.

The process started from filming and editing an introduction video of myself with highlights of my volleyball actions.

Once my volleyball video was on my profile on VolleyUSA, I got requests from coaches, who sometimes just wanted more video material, but also a few others who seemed highly interested and communicative.

One of those people was my current head coach Joanne Persico, who showed strong interest from the very beginning and was one of the first coaches who reached out to me. We started to Skype, which was nerve-wracking and stressful for me in the beginning because my English wasn’t very good and I was afraid to not understand her and she wouldn’t understand me. But it worked out and we had a great connection from the very beginning.

When she suggested to visit me, here in Germany, to see me playing, I didn’t take it seriously.

I thought “What coach is flying all over the planet to see me playing volleyball?!” But she wasn’t kidding. Joanne Persico, from Queens NY, visited me in June 2015, right before our National Championship under 20. She came to Schwerin, where my mom picked her up from the central station, she saw my home, met my dad, my aunt and my grandpa and traveled with my parents the next day to Borken, where the National Championship was held.

Unfortunately, we didn’t perform our best that weekend, and finished 5th place (from 16 teams).

Nevertheless, she was convinced with my performance as a player as well as a person. She offered me a full four-year scholarship at St. John’s University, a D1 university, in Queens NY. I signed the contract in November 2015 and was invited to visit St. John’s as an official visit in December for 2.5 days.

The visit gave me an insight in college life, but also experiences I will never forget. I was able to attend a St. John’s Men’s Basketball game with front row seats at Madison Square Garden. I walked over Brooklyn Bridge for the very first time which was magical. I fell in love with New York City, and could have not been more excited and thrilled to call it my home nine months later.

August 10 2016, was the day I left home to start my new life in America. I was extremely nervous and excited at the same time. My team welcomed me with open arms and I was luckily not the only foreign player, which did not make me feel left out.

My team had players from Italy, Finland and Canada, and I was the first player from Germany that has ever been on the team.

I was lucky to have a great roommate on campus as well as incredible suitemates that made my new life, far away from home, easy, to settle down in my new home.

The first season was not easy though. I wasn’t playing much in the first half of the season and it made me doubt if I could ever be good enough. My coaches, nevertheless, kept on pushing and believing in me and when I finally got better and stronger in practice I got the opportunity to show my skills during games. I have to say the first season was also the least successful season for the team overall. But to be honest, that is good, because the team and I had opportunities to improve and get better.

My sophomore year, I have to say was my most successful season. I played every game and had a great overall record at the end of the season. However, we failed the playoffs my second year as well, which was very disappointing. The goal for the upcoming season was set.

My junior year started pretty bad, for me in particular. I got hurt during our third game at our first preseason tournament of the year. After four weeks of pain and pushing through I finally got an MRI and the result was worse than expected. My biceps head pooped out of the grove and was somewhere in my arm, and I tore my labrum three times in the front and one time in the back of my shoulder. Surgery was not a question but reality. The doctor gave me the choice of letting me trying to play through the season or to get surgery right away. I decided to keep playing and somehow managed it, with a lot of physical therapy, icing and medicine. I still played most games, I was still able to block pain-free, just hitting was a challenge. This year we made it to the Big East Tournament and finished the playoffs with the 3rd place. However, we didn’t make the NCAA, we got the chance to participate in the NIVC.

After the season was over, in the beginning of December, me, my coaches and my parents agreed that I will get surgery as soon as winter break is over and I get back from Germany.

I wanted to have a last successful senior season with a healthy right arm and shoulder.

I got surgery in January and went through a long rehab. I got cleared from my doctor in August 2019 right before our preseason started. Already during our first practice I was too confident when I attempted to hit a ball and my entire shoulder got tightened up and I had to go light for two weeks. At the end of the same month my team and I had our first preseason tournament in Hawaii. I have to say, it was probably the most wonderful and exciting trip we had made as a team and I couldn’t be more grateful for this experience. My shoulder started to get used to swinging and hitting when during another preseason tournament at Florida State, I injured my left elbow while blocking. This was mid-September and our conference was about to start. I was out again. The MRI showed a tear in my UCL. I had to be careful, because another bad block could have torn the UCL completely and another surgery and very long rehab would have been ahead of me. I was out for five weeks, with the hope it would heal by itself. It didn’t. I was able to get an elbow brace that would protect the elbow in some way but it all didn’t work completely and I was mostly on the bench for the rest of the season. Nevertheless, we had the program’s most successful season since 2008. We won the Big East Championship after beating two top-10 ranked teams (Marquette and Creighton), for the second time in school history. Nobody expected such success, especially because we entered the playoffs as the fourth and final team.

The selection show decided that we would face Texas A&M at their campus the following week for the first round in the NCAA tournament.

We fought hard and pushed to our limits and last strengths but had to be defeated. The season was over and so my collegial volleyball career.

The emotions I felt after that game were the exact opposite as one week ago when we won our conference. I couldn’t believe it was the last time I was wearing the St. John’s jersey and writing this makes me tear up all over again. It was over and now I realized how fast time actually goes. Those four seasons as a Johnnie are the best years of my career and I am so grateful for everything I have seen, experienced and learned.

In May, I will receive my Bachelor in Science for Hospitality Management and Business. I chose this program because I found myself highly interested in this field. I love to travel and to learn more about destinations and other parts of the world in terms of cuisine, culture and lifestyles.  Thinking my time here is coming to an end very soon makes me incredibly sad. I don’t know how time can fly by so fast, but thinking back I had so many joyful, never-forgetting memories and adventures I will keep forever in my heart. I had the best four years of my life so far and I am beyond grateful that I got this opportunity, thanks to the help of Sandra and VolleyUSA, and my parents.

To whoever is thinking about taking this step, applying for a scholarship in the US, I can only, with me entire heart, recommend it. Those years will be the best of your life and even if you need to come out of your comfort zone in the beginning, it is absolutely worth it.

Believe me, you will not regret it!