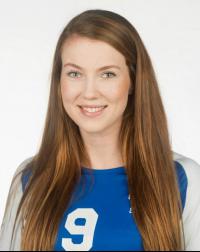 From Iceland to USA

I had have the idea of going to college in the States for quite a bit but I never believed it could be a reality. I kinda just thought about it as a day dream. My English ability was very poor and I just didn’t see it as a possibility. I still kept on looking at schools and looking at ways of getting there, but again everything was in English and that was my biggest weakness in high school. Then I just started searching on Google how I could get there with help and the first person that popped up was Sandra/VolleyUSA. I contacted her and got a very quick response about everything I needed to do for her before the next step was available and she said she would help me through each and every step. That’s when I saw the light and it all finally seemed to be a possibility.

Me and Sandra were in constant communication because it was already Spring and there wasn’t too much time left. I took the TOEFL test 2x and did bad both times. I had gotten attention from several schools but my English ability was never good enough for them to look at me with serious eyes. In the end of May I got a call from a Junior College in Baytown, Texas that was willing to accept my low score and make an exception for me. I believe this was May 31st in 2012 and I signed a couple days later.

Summer 2012 was quiet but there was paper work to do which Sandra helped me get through and I would never have finished everything on time without her help! July 31st I was on the plane heading to Baytown, Texas.

I stayed a couple of days with the head coach before moving in to my apartment and then training started every day, at least two times a day. The first two weeks were miserable. I couldn’t walk. I honestly didn’t know what to expect and I should have prepared myself better physically than I did.

I got through freshman year knowing little English and playing volleyball in a higher level than I was used to. I went home for Christmas 2012 and wasn’t really sure if I wanted to come back or not. It was very hard to be this far away from home and having a very tough schedule every day. January, everything changed. I came back with a different mentality and stronger. I knew I wanted to be there and get better, so I put more effort into everything.

Sophomore year was great, pre-season was a lot more durable because I knew what I was coming into and had prepared myself well. I had a good season and got offers to continue and play for other schools.

I transferred to Louisiana Tech University after graduating from my Junior College in 2014. La Tech was a lot different than Lee College, both the competition and the education. We had a lot of internationals in the team which helped me a lot because we were all in the same boat, being far away from home. I adjusted a lot faster to the program which allowed me to grow faster. At Tech, I also had a lot more freedom which allowed me to grow as a person. I really liked the program as they are growing every year and it’s awesome to be able to be part of that.

Early weight training, conditioning, meetings, practices, traveling, games, and school isn’t for everyone. You really have to commit to it and make it your lifestyle. You have to sacrifice a lot of things that other college students are able to do. During these 4 years in the States I have been able to travel a lot. Combined with both my schools I believe I played teams in 15 different states.

Volleyball in the States vs. in Iceland is very different. For example, it’s a lot faster, more organized, more play sets, and then everyone is at a very similar age. Also, we watch film and study the opposite team before every game. Then game days and traveling is stricter, it has a certain routine and everyone stays together throughout the whole trip. I would say, you can more relate it to a business in Iceland.

Studying in the States is a lot different than I thought it would be. The first two years were pretty much the same as high school so it wasn’t such a difficult change except for the language barriers I was dealing with.

This experience has definitely changed me personally. I appreciate my beautiful country a lot more, my family and friends back home, the safety in Iceland, the food and nature. But at the same time, I love it here and it has made me who I am today. I am mentally stronger, and I see the world with different eyes.

I’m really thankful for this opportunity which has let me play the sport I love while experiencing the USA. Something I’ll cherish forever!