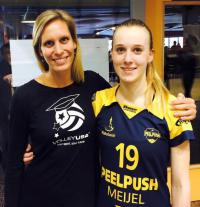 My volleyball season at HCC

About a year ago, I first heard about Sandra through a friend of mine. I already knew that I wanted to take a gap year, but I wasn’t sure what I wanted to do in that year. I sent Sandra an email and the week we had a skype call. When I was playing at a tournament in The Netherlands, Sandra came there to see me. It was very nice to meet her in person. Sandra helped me get a scholarship at Hillsborough community college in Tampa, Florida.

When I arrived in Tampa, a lot of the girls on the team came to the airport to pick me up. Everyone was very nice and helpful the first days I was here. I moved into an apartment with three of my teammates. Because everyone on our team lives together, we know each other very well. There are 4 internationals on the team. One of them is from Greece, one of them is from Porto-Rico, I am from The Netherlands, and the last one is from the British Virgin Islands. It is very nice to have other people from other countries on the team because they know what it means to move far away from home and they understand what you go through.

On August 1st, pre-season started. I used to practice three times a week when I lived in the Netherlands, but during pre-season we practiced about seven hours a day for two weeks straight. At first, I had to get used to the way they practice in the US, but I learned a lot. Back home, I played in the first division. I think the level of play in the US is comparable to the division I played in before I made my trip.

After those two weeks, school started. I had class on Monday through Thursday and Friday, Saturday, and Sunday were weekend. We practiced six days a week, three hours a day. Although we had a very busy schedule during the volleyball season, we also had plenty of time for things other than practice and games. The classes were relatively easy compared to the classes I took at my high school back home so I hardly spent any time studying. The teachers were pretty nice and understanding. They knew that I was on the volleyball team and most of them gave me extra time to turn in assignments and homework.

Our team did very well this season. We became first in our conference and first in our state. This meant we got to go to Casper, Wyoming to play at Nationals. Each year, the best 18 team of the US go to nationals to compete for the national title. Going to states and nationals definitely was a once-in-a-lifetime experience. We went there by plane and it was snowing when we arrived. Every team had a guest family. The guest family shows the team the city and organizes activities for them. Our guest family made us breakfast and invited us to their home where we played just dance with the whole team. They also took us sledding and took us to a local elementary school where we met the kids and told them about our experiences playing sports in college. We played five games that week and won four of them. We became third of the nation. Playing at big tournament like states and nationals was awesome. I really can’t describe the feeling you get when you play in those matches where you know everyone is watching. I have felt the best and the worst during the trip to Wyoming. One day you lose the semi-final and you are about to cry, the next day you go sledding with the whole team and you feel like you’re on top of the world. Playing a successful season at HCC definitely has been an emotional rollercoaster at times, but I am so happy I got to experience all of it and I made memories that I know will last a lifetime.

When the season was over, we played beach volleyball and we coached high school girls. The classes I took my second semester were a bit harder than my first semester, but I still didn’t have to do much for school. I went to Universal Studios with my roommate, I went to a country club with two of my roommates, I went to a baseball game with three other teammates, and we had a bunch of parties.

In two and a half months, I return to the Netherlands to study biology, but I will definitely miss the life I have here. I loved playing volleyball every day and working hard to achieve our goals together. The weather here is great and I love my teammates. Going to the US for a year definitely was a great experience and I am very happy I took a chance and contacted Sandra to help me find a spot on the roster!