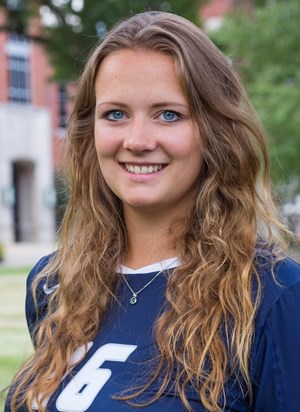 “Life begins at the end of your comfort zone”.

Volleyball has been my passion and hobby since I was seven years old. My older brother played successfully in our hometown of Dresden, Germany, influencing my passion for the game at a young age. After quitting sports school in Dresden; when I was 15, I never thought that volleyball would provide me the opportunity to move to a different country. During my senior year in high school, I wondered: What’s the best I can do in my life, now? Maintaining close contact, I witnessed former teammates playing college volleyball in the U.S. I filled out the chance evaluation on VolleyUSA, immediately interested in this path to America. Sandra contacted me right away to ensure me I would have a good chance of finding an athletic scholarship. I joined considerably late in the recruiting process; however, I committed to Frank Phillips College in Borger, Texas. Thankfully, through Sandra’s constant assistance, all my documents were ready before I left in August 2014.

Many people asked, why I chose to receive an education at a small school in Borger, TX. I believe a junior college is a positive advantage to improving and expanding your English language skills. The classroom sizes are smaller, professors know you by name, the community is supportive, and you become extremely close to your teammates. In addition, the probability of playing as a freshman is higher than that of playing at a 4-year university. In reflection, this was also a great decision because I did not have to decide on a major, yet.

My advice to you: Choose a place that is different than the familiarity and contentment of Germany! Borger was vastly different from Dresden. I remember taking pictures of guys in cowboy hats, and sending them to my friends at home because I felt I was in a movie. These same types of “cowboys” became some of my greatest friends. I am forever grateful to them for introducing me to their way of living, and welcoming me into their homes. Furthermore, I was so happy to find out that my friend Victoria, who played for Texas Tech, lived only 2.5 hours from me.

Attending a sports school in Germany was the best preparation before becoming a college athlete in the U.S. I was used to practicing twice-a-day, and planning my study time wisely. The turnover of players attending junior colleges is so fast, that we had two completely different seasons at FPC. My freshman season, we only won one conference match. During my sophomore season, we only lost one. This same year, we also won the regular season and conference tournament. I will never forget the support from our college and community the day we left for the national tournament in Casper, Wyoming. We received three goody bags from different churches; furthermore, other athletes, coaches and professors cheered our way to the bus, and fire trucks escorted us out of town. All this effort and excitement to exemplify the town’s support, and the college’s support, because we achieved a milestone that only happens once every ten years at FPC.

During the spring semester in 2016, I started to contact coaches with the intention of transferring and finishing my bachelor’s degree. Sandra guided and assisted me during this process, as well. In a span of three days, I received an email from Coach Washington; spoke to her and a teammate on the phone; sent her my transcripts; and committed to play for Columbia College, in Missouri. The CC volleyball program had just won the NAIA National Championship in 2015, and remains the winningest program in the NAIA. I did not think twice before playing for such a successful program. In addition, CC had an excellent business program, and offered the major I finally chose: International Business.

When I arrived in Columbia, Missouri, I noticed right away how diverse and international my new team was. The first teammates I met were from Greece, Mexico, Colombia and China and I loved it! I went on a 24-hour road trip from Missouri to Miami with three Latinas, who not only taught me salsa, but also increased my excitement in learning Spanish. Having teammates from all over the world, grew my love for traveling, and I cannot wait to visit their home countries. During my two years at CC, we won a conference tournament and a regular season championship. Although we expected more from ourselves, making it to the Elite Eight at Nationals, in 2016, was my athletic highlight.

When I am thinking back on the past four years of being a student athlete in the U.S., I am thankful for: the lifelong friendships I built and the families who treated me like their own daughter; the passion for volleyball that my teammates and coaches share; the “start-overs”; sharing my room with American and international teammates; the places I got to see while traveling during season and Spring Breaks; the studying on the bus, in hotel rooms or gym hallways; the support from professors; the shopping; Sandra’s guidance and expertise; and – most importantly – the support from my German family and friends.

One last piece of advice: be open to the experiences that are happening around you. You are not religious? Go to church with your teammates! You don’t like eating Turkey? Good luck on finding an alternative during Thanksgiving; so, just eat it! You have the opportunity to coach younger girls, but you have no coaching experience? Just do it because you have a different perspective and playing experience! You have never had an idea of what being home-schooled looks like? Ask questions and watch them when you get the chance to (home-schooled Americans are awesome)! Get out of your comfort zone and learn what makes other cultures unique!