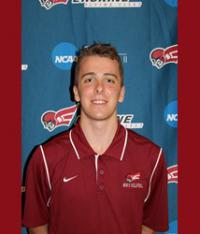 Hi, my name is Johannes Leipert and thanks to Sandra I had the great opportunity to spend a year in the US, playing Volleyball and studying.

I was only in 10th grade when I decided to fill out the evaluation form to contact Sandra, however at this moment I was scared to send her a game tape because I thought I was not good enough yet to actually get a scholarship. Sandra had faith in me though and told me to get back to her as soon as I felt like I got better. So I kept making improvements and got accepted into her program not very long after that. It already was early in 2015 when I still had only two offers from West Virginia and Missouri but I felt like there was more in store than that so I made another, improved highlight tape. And it didn’t take long until I got my dream offer from Erskine College in South Carolina. I got offered one of the biggest scholarships for a male player, Sandra had ever recruited, which I was very proud of. So after clearing all the paperwork which was thanks to Sandra’s help not too much of an issue, I was sitting on the plane to my new home for the next 9 months (get an exit seat – it’s worth it!).

I got accepted by the people there in an amazingly great manner (everybody wanted to get to know “the German” :-D) and I felt like a part of the team from the very first day. After answering the same questions to everybody over and over again (yes the Autobahn really exists and yes, I’ve been to the real Oktoberfest lol) I really was part of the whole campus community. The college is really small with only about 700 students, of which 65% are athletes so it was easy to really get to know people and make friends.

After a few months, fall season began where we finally started practicing every day and playing exhibition tournaments which was the first time I really got around in the US which was amazing. I even got to spend Thanksgiving in Florida with an amazing teammate and his girlfriend, who was the assistant coach for our women’s volleyball team, which was truly amazing, visiting the Universal Studios, going wakeboarding etc.

When I came back for spring semester, season finally was here.

Unfortunately I had to sit out our game against the then national champion Ohio State, one of the biggest universities in the whole country, due to a concussion. The week after we went to Chicago to play the defending national champion and runner up at their gyms which was an awesome experience as well. The volleyball level in these matches was very high, comparable to a high level matchup in the 2nd division in Germany.

Then conference play started where the level of play sunk a little bit, some colleges would have probably gotten beaten by a 5th division team in Germany but that’s alright because we also had some really talented conference opponents and played against junior national team players from Serbia and the Netherlands amongst others.

After we lost the second time in the conference we had a change of Coaches because we had the clear goal to win the conference. The women’s coach took over and brought a whole different level into practices and conditioning which made us improve a lot. Unfortunately with the first playoff match, I sprained my ankle really bad so I was out for the rest of the season. The team went on to win the conference though and compete at the NCAA Final 6 tournament as the #5 seed, the first time a team from our conference was able to achieve that.

Then, season was over and I flew back to Germany, but I can look back on one of the best years of my life, thanks to my teammates and friends.

There were a couple of things that influenced me on my decision not to come back for my sophomore year but everybody who has the chance should totally go for it and contact Sandra – it’s definitely worth it !