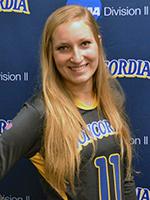 I always loved the United States as well as playing Volleyball. Still it took me until I was 21 to consider the opportunity of going to the States to study and play Volleyball there. I was only playing in the “Landesliga” in Bavaria so the really good Universities for Volleyball were no option for me. Still, I decided to try my luck and go through the application process with Sandra. She encouraged me to try it from the beginning and I am very glad I did. In April 2014 I finally had all the paper work done, my video was finished and I had passed the TOEFL test. Then the waiting began. After a while my (soon-to-be) coach from Concordia College in New York contacted me. Since it was already very late for recruiting she wanted to move forward with the process quickly which was perfect but also stressful for me. In June 2014 I signed and in August 2014 I was on my way to New York.

The College was a small, private, and Lutheran College in Bronxville, NY, only 30 minutes away from the Grand Central Station in NYC. My dream come true. The first week at my new home consisted of only Volleyball: pre-season! It was hard working out and playing Volleyball for 5 hours a day but I got used to it fast (even though the 35°C and no A/C did not really help). The time was also perfect for getting to know the team mates. When you spend that much time together you make friends quickly and get to know people really fast. I can now say during that week I made lifelong friends.

The season started sooner than expected and was over even quicker. Looking back it was a great time even though we did not have a good season and some trouble within the team. Our coach, who I really liked, moved to Florida after the season and our post season (during the second semester) we already had a different coach. During the Spring Term we practiced at 6 in the morning for a couple of weeks.

Of course my year in NY did not only consist of Volleyball. The courses I took were very interesting (mostly) but also very easy compared to my courses at the LMU in Munich. Still, the work that had to be done was time consuming. The relationship to my professors was completely different than in Munich. We had classes of 15-30 people and I had a very friendly relationship to them. I even got the opportunity to become part of a Marketing Team and participate at a National Marketing Competition where we took a trip to St. Louis to present our Marketing Plan. We placed 3rd which was a great thing compared to the past years 😉

Next to studying and playing Volleyball I just loved the “American Way of Life”. Living in a dorm with your best friend, going to the city (NYC) every weekend and just enjoying college life were only some of my highlights during my year in NY.

Overall I can say without a doubt: Taking this opportunity and playing Volleyball in the United States is the best thing you can do! You don’t only improve your Volleyball skills but you also grow personally!

Even though Sandra was a great help when I was thinking about taking this step, I wished I could have talked to somebody else who had already done it. So if you are in that situation right now, please feel free to contact me and ask any questions you might have!