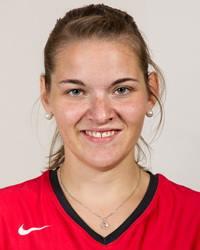 I am back in Berlin since over two month now enjoying my summer but this past year I had in the USA was definitely the most exciting one I had in my life so far.

So let’s start about two and a half years ago – one year before I should graduate from high school. I never thought that I would have the chance to get an athletic scholarship for an American college. But after our Berlin championship I received a message from Sandra. She told me that I would have good chances to get a scholarship and so I tried it. Some paperwork and videos later I got offers from college coaches. It was really hard to decide where I want to go but after I talked to Sandra I made my decision. I wanted to go to Casper College in Wyoming where I got a full scholarship.

The weeks and month went by with a lot more paperwork. However, before I knew it, it was time to pack my suitcase and leave. I was pretty scared because I had no idea what was waiting for me so far away from home but I was always pretty excited to start a new chapter in my life. After a long 24 hours journey I finally arrived at the airport in Casper where my head coach Angel Sharman was waiting to pick me up.

The first few days were really tough. Two and more practices a day in an elevation and heat I was definitely not used to. Also I had to get to know everybody. But I fell in love with Casper, my team, and all the people from the first second I met them. Everybody was taking care for me trying to help me with everything I had to do.

When season started I was totally excited to play with my new team. During the really short season we had a lot of ups and downs and as Coach always said we played like a rollercoaster but it was still a pretty good one. We became second in our region after losing the championship game in five. Even though, I think I never play as good as I did at Casper College. Everybody, not only the players and coaches, but also the teachers, the athletic staff, our trainers and the whole college, were working for the team to succeed. We were not only a team but a family.

After nine month I spent in Casper, there are a lot of people I have to thank. First of all, I have to thank Sandra for giving me chance and the faith that I can do it and for helping me with the whole organization. I could have never done this without you. Also really special thanks go to my parents, who supported me as my biggest fans through the good and bad times. Probably the biggest thank you goes to my coach. She was one of the best coaches I ever had. Even though I am not always an easy player she never gave up on me and made me a better player and person.

All in all, I can just say that the decision to go to the U.S. to play volleyball was one of the best I ever made. Also the decision to go to Casper was a pretty good one. Casper is in the middle of nowhere and nobody really knows it, but we were a family and all the people there made it so easy for me to feel like I am home. I don’t want to miss any of the moments I had there.

So, if you get the chance to play volleyball at a college or university in the USA – DO IT! It is so worth it and I think nobody would regret it.