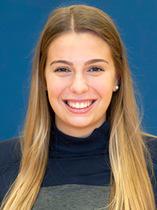 Before meeting Sandra, I had no idea about college sports in the United States. I used to play volleyball for a small club called “SG Einheit Zepernick” outside of Berlin, Germany. I never thought that my passion for volleyball would ever actually help in my future. During my last months of high school, I was undecided what I want to do once I graduate. I just always knew that I wanted to leave Germany for a few years and that I wanted to continue playing volleyball, maybe just for fun. The combination of these two things seemed almost impossible, but then I met Sandra. After talking to her about going to college in the US, I decided quickly that this was what I wanted to do.

It was a long process of getting paper work done, taking tests, and editing videos, but with Sandra’s help I got through all of that. I got emails from a lot of different colleges from all different divisions in the US. Coming from Germany, I was not really aware of the fact how big volleyball actually is in the States. After a lot of emails and Skype conversations, I decided to start my studies in the US at a junior college because I was not really sure whether I wanted to stay for longer or maybe just for a year to learn English. In Fall 2014, I got offered a full scholarship to play for the Western Nebraska Community College Cougars in Scottsbluff, Nebraska, and I signed just a couple of days later.

My last weeks of high school and the summer after passed by fast, and at the end of July 2015, I was on an airplane going to the United States. It was hard saying goodbye to my family and friends back home in Berlin, but once I got to Nebraska, there were so many new impressions that I barely had time to be homesick or think about home too much.

At the beginning of August, we jumped right into my first preseason as a Cougar. The first couple of weeks were kind of hard for me. It was a new language, new type of practices, new people, and so on. However, I adapted to everything quickly, and once school started a few weeks later, I met a lot of new people. I was lucky to be at a school with a lot of other international students from all over the world who shared my experience of being on my own in a foreign country. My first season as a Cougar was a success. I was able to earn a starting spot on the team, and I had the opportunity to play with a lot of very talented other girls from, for example, Brazil, Peru, Hawaii, and other States of the US. The games, especially home games, were a new experience for me. I was blown away by the high interest in volleyball from other students and the community. Our games would always have a big crowd watching us play which was a little new for me at the beginning, but it was also a lot of fun. At the end of my Freshman season, we were able to win the Region IX Championship, and we advanced to the NJCAA National Tournament. We finished the tournament as National Runner-up Champions which was huge success for us and an experience to truly remember for me. I had never experienced such a huge tournament in my life. After this tournament, I almost immediately made the decision that I want to come back next year. At the end of my first year, I resigned to come back after the summer and play another season for the WNCC Cougars.

Leaving home for the second year was a lot easier since I knew what to expect in Nebraska. I knew the coaches, most of the other girls, my friends from school, and the teachers which did not really make it feel like I leave home, but more like I was going back to my second home. It felt like my second and last year at WNCC passed by a lot faster than the first one. Again, we had a great season finishing 8th in the nation, and I even got the opportunity to lead my team as a captain. In addition, I was honored to be selected to the All-tournament team at the national tournament as well as to the AVCA All-American 2nd team. During my sophomore year, I made the decision that I wanted to move on after this year at WNCC to play for a 4-year school and to get my Bachelor’s degree. My coach in Nebraska and Sandra helped me to get in touch with a lot of different universities. It felt similar to what I experienced before coming to the States, except that I knew this time what to expect and how college in the US actually works. After visiting a few schools, I made my decision to play D1 volleyball for Oral Robert’s University in Tulsa, Oklahoma. In April 2017, I officially signed my NLI to continue my career which was just an amazing feeling.

I would have never thought it before, but leaving Nebraska and all the people I met there was very hard for me. I earned my Associates Degree of Arts in Business Administration in May 2017. After that, I went home for two month to spend the summer with my family and friends back home. In July 2017, my new adventure of playing D1 volleyball started. Before coming to Tulsa, I thought I knew what to expect since I already played two season in the US. However, I realized quickly that playing D1 is a whole different thing than playing at a JUCO. Everything was new again, practice and weights were a lot harder, and I was struggling during preseason to keep up during practice. It felt like freshman year all over again. I did not know anyone, and it was a new school in a new town. However, I got used to the changes quickly again. There was not a whole lot of time to worry too much about everything or to be homesick. At this time, we finished our preseason where we got to play against some of the major teams like the Nebraska Huskers. I am glad that I made the decision to come here. Right now, I am in the middle of my first season as a Golden Eagle, and I am excited about what these next 1.5 years have in store for me. I am planning on graduating in May 2019 with my Bachelor’s degree in International Business.

All in all, I could not be happier with my decision of coming to the US and play college volleyball Learning to speak English fluently is just one of all the things I have learned. I cannot even describe how much I have developed as a person and as a player since my first year in Nebraska, and sometimes, it still seems a little bit unreal to be here. For international students and athletes, schools in the US provide a lot of help and support that make it possible to be successful in your sport as well as in your studies. Academically, I never had any problems keeping up with the material or with my grades. At the beginning, it might have seemed difficult to be in a country with a new language, but it took me just a few months until I got used to talking in English all the time. During my time in the US, I have seen a lot of different places. I have traveled to most of the major states with my friends here during breaks, and we also traveled a lot for games and tournaments.

At the end, I can just thank Sandra for giving me the opportunity to experience all that. Throughout the past couple of years, I met so many interesting people and made friends from all over the world which I am going to visit in the future. Also, I got the chance to continue playing my favorite sport, I learned English, and I will earn my Bachelor’s degree at the end of my time here in the US. Looking back, I can just say that coming here was one of the best decision I ever made in my life.