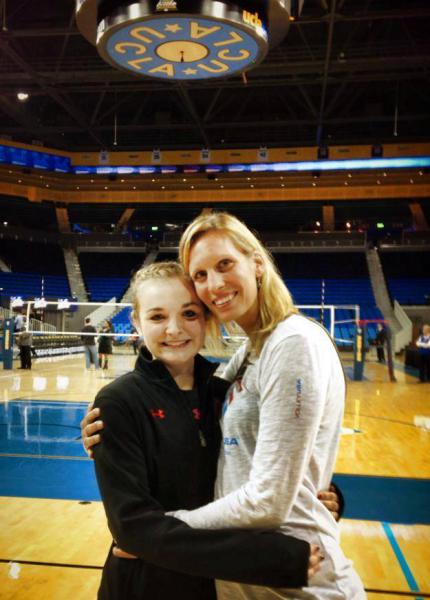 I always wanted to be an exchange student in high school but when the time came, I had just started playing volleyball more competitively and did not want to give up the opportunities that came along with volleyball. My coach told me about VolleyUSA and the option to study abroad while playing volleyball at a high level after high school so I postponed my plans – probably the best decision I could have made.

During my last year of high school I filled out the chance evaluation online and shortly after Sandra contacted me. It was so good having her right by my side throughout the entire process. She helped me fill out documents, get a visa, meet deadlines, feel confident in whatever I did, and most importantly find the school and the team that was the perfect fit for me.

I ended up committing to the University of Utah. My friends always asked me why Utah, when I had offers from California as well. Honestly, I don’t really know. I just felt like it would be a good fit, they played at a very high level, the coaching staff was really interested in me, and the mountains including their ski resorts around Salt Lake were tempting… I just trusted my guts and committed without listening to what others said. And it worked out perfectly!

Although I was super excited throughout the entire year of preparation, the last couple of days in Germany really made me question myself – why would I leave all my friends and family behind and leave Germany to go somewhere I don’t know anyone or anything?  Because I picked up my visa literally last second (the day before I left Germany) I never really got time to think about what exactly I was doing and it did not hit me until the day before I left. Luckily, at that point there was no going back anymore because little did I know that four amazing years of college were just waiting for me to start!

I landed in Salt Lake City, Utah on August 4th, 2009 and got picked up not only by my assistant coach but two of my new teammates as well. They made me feel welcome from the very start. We toured campus for a little bit, went out for dinner with a few more players, and then went home to a teammate’s house where I stayed for the first couple of days. The next day I met the rest of the team and everybody was welcoming, open minded, and willing to help!

A couple of days later we had a few meetings and photo shoots before the official pre-season began: Practice twice a day, weightlifting and conditioning four times a week, ice-baths after every practice… No wonder everybody was excited for school to start two weeks later when we cut it down to practice once a day and weightlifting/conditioning only three times a week. Although the first two weeks were hard, everybody was pushing their limits and it was amazing to see how everybody improved within such a short amount of time. We definitely bonded as a team and got to know each other pretty well. We were expected to give 100% every single day, which was hard but paid off for sure.

Not only the schedule but the game itself was a lot different at first as well. We played with Molten balls and the game was a lot faster than what I was used to. Also, technique was taught differently and there are some rules that are different from the German (international) rules. But I just looked at it as another challenge that I accepted and it was fun getting a completely different view of the game.

Generally speaking, college volleyball has a pretty high standard in the community and at the school. We had a huge crowd for almost every single game and it was super fun to play in front of a lot of fans. Everything seemed very professional and thinking back to the gear (shoes, kneepads, socks, spandex, shorts, sweaters, hoodies, sweatpants, jackets, yoga pants, travel bags, duffle bags, bag packs, hats, water bottles, sports bras, etc.) we got every year, one could tell how much money people donate to run the program.

During season (fall semester) we practiced every afternoon and lifted weights early in the morning so we could schedule morning or night classes. As a student athlete you definitely have a full schedule but we had lots of advisors, tutors, and mentors that helped us stay on top of things and fulfill all the requirements. In spring, off season training started, which means more weights/conditioning and less volleyball during the first couple of months. That way we had more time to focus on our studies and get back on track if needed.

Of course I missed my family and my friends and sometimes it was hard to be so far away from everything but at the same I learned to appreciate being home for Christmas even more and weekly Skype sessions made it easy to keep in touch. Although I was missing home quite a bit halfway through my first season, my new teammates were there for me and made me feel better. Also, it was good to know that no matter how far away I was I could always contact Sandra and ask her questions even if they weren’t volleyball related. There was always someone there who understood where I was at, which made it a lot easier.

Overall, I am looking back to four amazing and adventurous years. I have grown so much as a person and learnt a lot about myself and others. I have built friendships that will last a lifetime and I made memories that no one can take away from me. With the team we flew to every away game that we played during our regular season which gave me the chance to travel around the US and see lots of beautiful places. I graduated just a few months ago and I already wish I could sign up for another four years of being a student athlete.