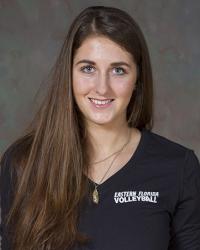 After I graduated from the school in Germany one thing was for sure: I wanted to leave Germany and explore a new world and lifestyle in United States.

It was a long process of paperwork and waiting on offers but with the help of Sandra, my dream of playing Volleyball in Florida came true. Even though my bad English caused some huge problems and the college told me I was not able to study at Eastern Florida State College (EFSC) because of English, it all worked out.

It cost a lot of time in front of skype and a few tears but in August 2014 and a week later I finally arrived in Melbourne, Florida. All the hard work was rewarded.

As a shy girl, not knowing English really well, I needed some time to feel comfortable around all the new people, instructors, coaches and my team mates. Even in Germany I used to take some time and look how everything works before I put myself in the middle of everything. That was my biggest worries when I left: that nobody would understand or like me because of the cultural differences. But it turned out all the Americans are open minded and really friendly and helpful. It took a few weeks to feel fully comfortable and start talking more and more. All of my team mates and even other sport teams helped me to feel good in college and practice. First I had some doubts to accomplish all the academic goals but it turned out it was not that hard.

Practice was a little different and the most irritating thing was the loud music during practice and the different rules. But with some time I got used to all the new habits. Furthermore in the apartments we always had fun together and I never had the feeling I was alone. Therefore, I rarely got homesick and enjoyed the free time at the pool, beach, or at the mall. While we were in season, there was not a lot of free time but afterwards I had a lot of time to go to some parties, making friends with the other sport teams and to enjoy a typical American Thanksgiving at a team mates’ house. I always used my free time to travel or spend it with my team mates which I became closer with.

In my second semester, the team and I were in off-season, so we worked out a lot and I also had a lot of free time. I took my chance and traveled to Los Angeles to spend my spring break with my sister. I also got to see a different state.

In Florida I enjoyed two great semesters with playing a good season and a good GPA. Even though, I only planned to stay one year abroad, I decided to stay for my sophomore year and to graduate at EFSC. Before I left for the summer break my family visited me and together we explored beautiful Florida. When I was back in Germany for two months friends asked me how I liked United States. I always answered that I really love the college life and the people, so I came back for my sophomore year. With almost a whole new team and a lot of different culture was mixed up on and off the court, not to mention the apartments. At the beginning it was hard to understand and communicate with my new team mates but thank god my English was a lot better and I was not as quiet as in my first semester.

In my second season we as a team did not do so great but I still had fun playing because the sport in the United States has a bigger value than it does in Germany. When I was hurt, I got great treatment from our athletic department and when I had some questions about my academic career I always could count on my coach or an advisor, so I was never left alone. Our cafeteria was great most of the time and not so great for my weight. We got closer with the team and made a trip to Virginia and for Thanksgiving I was invited to spend time with my room mate in Puerto Rico. It was an unforgettable experience and my first worries about sharing a room were completely unnecessary. We became really close.

In my last semester we played some beach volleyball which was great in Florida. We also worked out a lot and enjoyed my college life with all great things, for example a weekend trip to Miami. I also was able to see Colorado and a really cold snowstorm during my second Spring break with one of my closest team mates.

Over the four semesters I built some great friendships and I grew as a person. I learned a lot and made some great experiences. I really hope to stay in contact with them and see them again. I am really thankful for Sandra’s help and the great opportunity given to me. Leaving the United States was really hard but I know it was not a good bye forever, but a “see you soon”.