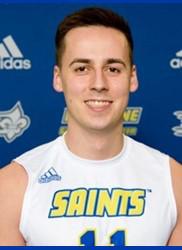 That’s it. It all ended as quickly as it began! After studying and playing volleyball at Limestone College in Gaffney, South Carolina, I am sitting in my bed back home in Germany, reminiscing about the past years. On the one hand I am happy and thankful for the experiences I made along the way and how this journey molded me as a person, on the other hand I am sad having to leave my close circle of college friends and the college life in general. All told, it just feels unreal that these four years have come to an end.

Let’s look back how everything began. After completing my Abitur in Friedrichshafen where I attended volleyball boarding school, I was not quite sure what I wanted to do with my life. The only thing I was certain about was that I wanted to travel abroad, to experience new countries and to broaden my horizon. At a tournament I saw Sandra’s flyer and thought I might as well try to apply and see if I can combine my athletic and academic career through VolleyUSA. A few weeks later I had offers from several colleges across the US and eventually chose Limestone College since I felt like the coach really wanted me on his roster.

After that everything went incredibly fast. I packed one suitcase, sat on the plane to Orlando, and met up with my roommate Joel. He picked me up from the airport and I was able to spend two weeks with him and his family before driving up to South Carolina. I was surprised by the hospitality and openness that his whole family showed me. Without his help, everything would have been way more difficult.

My first year in college was definitely the most fun one. I remember driving down College Drive, a beautiful avenue that leads to campus, surrounded by traditional southern mansions, thinking that this just looks like something I have had seen in movies before. Everything was new and it was exciting to meet new people, adjust to the culture, and to begin school. It was easy for me to make friends and make connections because I was foreign and everyone wanted to get to know me.

Looking at volleyball, there are major differences between the United States and Germany. Whereas most foreign players have great technique and understanding of the game, American players balance their technical shortcomings by a great deal of athleticism. Looking at that, conditioning twice a week on the football field, as well as 6am lifts three times a week were part of my everyday schedule. Overall I became a better athlete due to all the strength and conditioning that was part of the schedule. My team had quite a lot of turnover and we ultimately had a conglomerate roster each year. Although this might have weakened our team during some season, I was able to play with new teammates every year which was a valuable experience. Looking at that, I was able to be on the court with teammates from Brazil, France, Puerto Rico, and Finland.

Besides studying I have made lifelong friends, life changing experiences, and traveled all over the US. Since there was variety of international students at my school that were recruited to play sports such as tennis, soccer, or swimming. Since there were a lot of international students at Limestone, the foreigners oftentimes spent time together. I now have friends all over Europe, South America, and even in Australia.

One experience that humbled me as a person was when one of my teammates was diagnosed with a brain tumor. I remember when we were told before his surgery that his chances to live would be only about fifty percent. The surgery went well and I visited him every day in hospital during his recovery. However, the left side of his body is partially paralyzed and he cannot play volleyball anymore. These circumstances brought the whole team and even the whole school close together. The whole situation shaped me as a person and reminded me to be grateful about simple things in life that we take for granted until life strikes. Especially during school breaks such as Thanksgiving or Easter Break I was able to go home with my American friends. Their families always tried to entertain me and truly made me feel a part of their families. Looking at that I was often invited to one of my teammates that lived only one and a half hours away. Eventually I was able to return the favor and invited him to stay with me in Germany over Winter break.

Playing volleyball, I got to travel all over the United States. During my four years my team travelled to New York, Phoenix, Los Angeles, Columbus, and Orlando to play top teams such as UCLA, Ohio State, and GCU. Oftentimes we were given free time and had the chance to actually experience the different cities and the did some kind of sightseeing.

During my time in college I was in constant touch with Sandra. Besides setting up the paperwork prior to coming to the US, she always answered questions I had and supported along the journey. Even after graduation she helped me with my GA position which I am truly thankful for. Sandra sincerely cares about the success of her players, on and off the court, and one can be certain that she always gives her best to help.

I am particularly excited about keeping up friendships I made. Speaking about that, this week one of my friends from Sweden will visit me and I hope to go see him in Sweden soon. Another trip to France is to hopefully follow soon.

Looking back, the past four years have improved me in every aspect. I have not only learned to speak English, I am a more confident and well-rounded person. I would without a doubt make the same decision again and chose to study and play in the US.