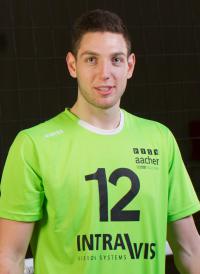 After my high school graduation I already played Volleyball in Germany for one year, but I needed to start thinking about my academic career. That was the point where I started to search opportunities to combine Volleyball with studying.

I got a lot of recommendations of websites where I should take a look on, but the one which stood out was VolleyUSA. I filled out the „free chance evaluation“ and was wondering if I would have a chance to get a scholarship. The next day I got an email, which I never expected, but I received an answer from Sandra. From the first moment where I got to work with her, either on my video, or the paper stuff, I had a super good feeling in working with her and I was certain that I made the right decision in authorizing VolleyUSA to get me in a university.

The first weeks were full of excitement and happiness. I got my first offers from coaches spread all over the States. I do not know why, but I waited until the last moment where I had to make a decision where I wanted to play, because Sandra was sure that I will get the offer I wanted; she was right, there it was the offer from Wes Schneider, the head coach from the Men’s Volleyball Team at the California Baptist University (CBU) in Riverside, California.

As the name from the university already reveals I wanted to go to California so bad.

Wes, Sandra and me had to figure out the Visa process, the options of the scholarship and the day of departure pretty fast, so that I was able to arrive in time when the program started.

There I was, at the Frankfurt Airport ready to leave for CBU. It was hard to leave my family, but I was full of excitement as well which mainly dominated my feelings. After a long flight of eleven hours to Los Angeles International Airport I was completely overwhelmed. The first impressions when I looked down on L.A. out of the plane were incredible.

It took me a long time until I realized that I fulfilled one of my dreams: Playing Volleyball overseas.

The team integrated me in a manner I did not experience before, we all were cool with each other and fitted as a unit on and off the court.

At the second day after my arrival we had an open gym and I already experienced what it means to play in a NCAA Division I team. The level and skills of my teammates were super high and my ambition came up and pushed me every day to my best on and off the court.

The first six weeks we had three practices a day; conditioning in the morning, lifting around lunch time after classes and practice in the gym every night, except the weekends.

Some days were really tough and sometimes it was hard to get out of the bed, because my legs were so sore, but pushing through and keeping the good work up every day brought me to a point where I never was before. I was in the best condition I ever had, I recognized that I matured both mentally and physically.

I had the chance to play against one of the best players in the world, for example Micah Christenson. I learned so much during the time at CBU, about the game Volleyball and how it gets taught in California, where the game has its origin, and about myself, my character.

Sometimes the coaches brought me to a point where it was very rough to pass their demands, but these were the practices where one learns the most.

Besides Volleyball I lived in an awesome area, very close to the different and wonderful beaches on the one side and not far away from Los Angeles or San Diego on the other one.

I had the chance to spend Thanksgiving Break with a teammate’s family near San Francisco and I got the chance to walk over the Golden Gate Bridge. Definitely something I will never forget.

All in all it was a great experience, which unfortunately had to end way too early, because there were a lot of bad things going on in my family, which brought me to the decision that I had to leave after the first semester.

But it was a great experience, which was totally worth the bunch of work I had before I was able to go to California.

Therefore, I want to thank Sandra greatly, in supporting and helping me out every time I needed help.

If somebody asks me, I always would give him/her the advice to play Volleyball in the United States. The coaches and players teach and live Volleyball in a different way than we do in Europe. If you ask which manner of teaching Volleyball might be better, stop asking these questions, go for the States, give it a try and figure it out by yourself.