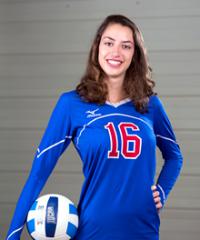 Volleyball has always been the thing I liked to do most. When I was little, I would play during the time-outs of my sister’s game. When I was old enough to start playing, I immediately started and never stopped. The opportunity to study and play volleyball abroad is great. I’m so thankful Sandra made this possible. After a lot of testing, making videos, filling out paperwork, and getting my Visa, I flew to Missouri at the end of summer.

The first two weeks were hard. With three practices a day, I was so tired that I didn’t even feel the jetlag. I don’t think my body has ever been so sore. When your alarm goes off, you roll over in bed and multiple parts of your body ache that you never knew could hurt. But the pain is worth it. We were ready for season.

After school started, we had a three hour practice every day. On the weekends, we flew to play tournaments in Florida, Utah, or we drove hours to play a game. On those bus trips people were trying to do homework, or trying to get some sleep. Driving through the States, staring out the window made me realize sometimes that I was really in America, and that this was really happening. It has been an awesome experience to see a lot of different states, and to play volleyball against great teams.

The team becomes your new family. They go through the exact same thing as you go through. You do the hard work-outs together and motivate each other to run faster. We do it for each other. We share the excitement after winning a game, the memories we made, and the appreciation toward the coaches and this program. Living in the dorms is so much fun. We had sleepovers, movie nights, and midnight trips to Sonic because we were just craving mozzarella sticks.

Waking up for our 6:45 work-out with our sports clothes on, because those extra minutes of sleep are valuable. The feeling we had when coach tells you to get to the end line. Walking toward the bleachers knowing it was going to be tough no matter what number of bleachers we had to run. We knew what was going to happen whenever our athletic trainer walked in. In the end, all of it was worth it. When our competition can’t keep up at the end of the game, it’s worth it.

The experience I had being a college athlete has been great. I learned a lot both on and off the court. I am extremely happy I ended up in the little town of West Plains with the greatest people there are. My advice to anyone who is playing/going to play in the States: work hard for yourself, the team, and the coaches. Value the people around you. Grab every opportunity to get better, and work your way up there. The grind never stops.