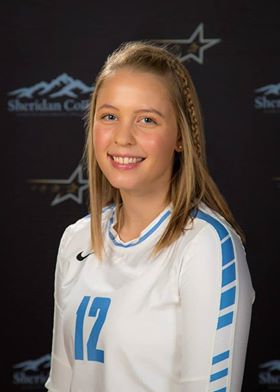 After playing volleyball for 7 years in Iceland I got the chance to play in a championship match with my team Afturelding. Little did I know that the game would change my life forever. After the match Sandra reached out to me and introduced me to the idea of playing college volleyball in the US. I always wanted to study abroad but I had only been focusing on Europe and I thought that after my years in Iceland I wouldn’t be able to play volleyball anymore. The idea of playing volleyball at a high level while studying at a university appealed to me and I decided to go for it.

A year and a lot of paperwork later, I had talked to a couple of different coaches and visited one school before an offer came from Sheridan College, Wyoming. I didn’t know much about the school or let alone the area, but it was an opportunity to try something new. It was only a month before the season started so paperwork had to be finished quickly and I have to admit that I have blocked this incredibly stressful time from my memory.

I remember arriving in Sheridan and it was above 100 degrees; a number that I had never seen before. This weather plus two or three pre-season intensive practices a day took some getting used to. Even though I was the only one that came from overseas, I was not the only one adapting to this new environment. We had thirteen incoming freshmen and only three returning sophomores. All of us were coming from different places and going through the same process.

Being on a team gives you a lot of advantage over other students. They become your family, best friends or not, your team will be there for you. Starting school went pretty smoothly and I remember around a month into the semester I finally had the feeling that I made the right decision as everything started falling into place and I became more familiar with the area. Teachers and students both are generally very understanding when you explain your situation; being a student athlete and in my case also speaking a second language didn’t give any unmanageable conflicts.

During my time at Sheridan College I was a full time student in both chemistry and music, worked at the school library and tutoring center, all on top of playing volleyball. People were surprised how I managed to do all this since I was a student athlete, but my answer was always the reason they were surprised. Volleyball has taught me numerous things such as time management, work ethic, determination, setting goals, and giving every day my best effort.

After two amazing seasons with Sheridan College I had to decide what the next step was. My career as a trumpet player was taking off and music stole my heart, so I decided to accept a scholarship offer from the University of Wyoming to study trumpet performance. I did not have the opportunity to play on the volleyball team at the University of Wyoming but I proudly play trumpet in many ensembles.

Even though volleyball isn’t my main focus right now, volleyball is what got me here and I’ll never forget that. Volleyball gave me the chance to see another side of the world, learn another language, meet new people and so much more. Volleyball is now my escape from the busy university life by playing in intramural leagues and officiating for local tournaments. I am forever thankful for all the opportunities that Sandra has given me by first talking to me at the game in Iceland and sticking with me through every step of the process. I will forever be blessed for being a part of the beautiful game known as volleyball.