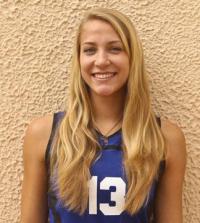 When I first heard about athletic scholarships at US Colleges I was fascinated by this possibility to study abroad. But I had already decided to go to Australia after my graduation from school to work and travel there. I thought that even though I played Volleyball for many years and made it up to the third division in Germany, such a scholarship wouldn’t be possible for me. A year before my graduation some volleyball friends told me that they wanted to go to the States and so I found Sandra. I emailed her asking if she thinks it would be possible for me to go to Australia first and get a scholarship afterwards. Contrary to my expectations she said yes. She said it would be harder for me because I wouldn’t play a whole season before going to the US. But I tried anyways.

I prepared my application during my last year at school before I left to Australia. Sandra was always very supportive and I could email her anytime. She helped me decide for a college and I signed with Western Texas College while I was still on the other side of the world.

I came back from my journey in April and had enough time to apply for a visa and to get everything organized before I left August 2013.

My time at Western Texas College was great! Snyder is just a small country town and the college wasn’t very big either, but the atmosphere was very familiar and welcoming. Everything on the campus was within walking distance. I made a lot of great friends within my team and the other athletes. Classes weren’t too hard for me and so I had enough free time even though we practiced every day and went on games and tournaments every weekend during the season. On one of these tournaments I even got to meet two other girls from Germany who got her scholarships with Sandra’s help. It was great sharing experiences with them and also we kept in touch afterwards.

One of my highlights was to spend Thanksgiving with a teammate and her family in Austin. SO much food! I really felt like part of the family, they even took me out to a German restaurant another day! Oh and of course we went country dancing! If you imagine Texans to walk around in boots, jeans, with a hat, driving pick-ups and listening to country music let me tell you how surprised I was about how many people really fulfil these clichés. We even had a rodeo team at our college.

All in all I can say that I don’t regret any of my decisions. Yes, it was a lot more stress, especially during my time in Australia when most people can’t think of anything that has to do with college. BUT it was totally worth it and I’m very thankful that I could fulfill both of my dreams. If you want to know more you can check out my blog: sblogt.blogspot.com