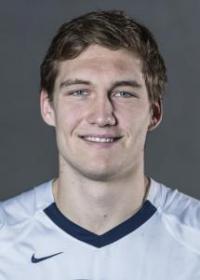 Time flies – we’ve all heard that phrase before but for me it has never been so on point as for my last four years in the U.S.

During my Christmas break in 2012 I contacted Sandra by filling out one of her evaluation forms, my first step towards an incredible adventure. About five hours later Sandra responded and told me to find some video tape for my highlight video.

Additionally, studying for the Toefl and ACT test were on the top of my to-do list. As soon as Sandra released the video I received offers from many different colleges not knowing where any of those were located. To make this story a little shorter I am skipping the boring part of decision making, taking the Toefl and ACT test and so on.

In the end it was Brigham Young University (BYU) located in Utah. All I thought was, how did I not end up somewhere near the beach in Florida, California, or Hawaii, why Utah and why a Mormon religion school?

Even though it all sounds a little crazy, let me tell you right away that it was the best decision I’ve ever made. Utah is a place known for outdoor activities, hiking, skiing, wake boarding, climbing, camping and so much more. Hot springs are all over the place and five national parks are just a three hour drive away. If you are from Europe I totally understand that three hours seem long to you but I promise you that you will get used to long drives.

Anyways, in August 2013 I packed all my stuff and started my journey. Flying to the United States for the first time in my life I was surprisingly calm and relaxed when I met my new assistant coach and teammate Jaylen, who picked me up at the Salt Lake City airport. I remember as if it was yesterday, the first meal I had in the states was In-n-Out Burger. You will understand why I am mentioning a burger place in my experience report as soon as get your first In-n-Out Burger.

The first few weeks were definitely not easy to get used to a new culture and coaching style, on top of a lot of school work. After a rough 2 months of pre-season and tons of conditioning, the beginning of the season came closer and closer but first we had a 10 day Christmas break. Since I wasn’t able to go back home to spend Christmas with my family a friend of mine offered to fly me out to San Diego for Christmas.

After 10 sunny days in California I was ready for season. That is the cool part, the time you realize what you worked for during your pre-season. The first home game was one of the coolest experiences ever. Warming up on the court, seeing how slowly the stands fill up with BYU fans, the student section is already going nuts and you are in the middle of it all. The first time I actually saw the gym packed with thousands of people, exactly what my older teammates were always talking about during pre-season. Then my name was called “6’9” freshman opposite straight from Germany, Tiiiiiim Dobbert”. The whole crowd is cheering and you get goose bumps all over while running on the court. 6,000 fans packed into a gym that is meant to hold about 5,000 – the craziest feeling ever.

Adjusting to America, to a religious university and to the coaches was all worth it when you start playing. After the first home game, people on campus start recognizing you and take pictures with you, and I’m talking about a University that has around 35,000 students. Even though it might sound a little over the top, I promise you there is nothing better than playing in front of a crowd like that and being part of a university where everyone supports what you are doing.

When the season was about ¾ done and classes were about to get difficult, I felt like I was about to burn out and needed a break, luckily our next away game was Hawaii. So instead of paying for a flight to Hawaii and an expensive hotel, it was all covered from BYU as it always is for a regular away game. While it was freezing cold and snowing in Utah, my team and I were able to play volleyball and enjoy the sun at the beach. If that doesn’t sound amazing then I really don’t know what else would.

During my four years at BYU we played 3 times in the NCAA National Championship Tournament, got a bachelors degree in engineering, improved my English by probably 400%, doors opened up that I would have never dreamed of, and I learned how to throw a football (That was after I tried out for the football team and didn’t make the cut at the beginning of my sophomore year). But most importantly, I made friends from all over the world, Puerto Rico, Alaska, Hawaii, Mexico, South Africa, Australia, Russia, Bulgaria, Venezuela, El Salvador and so on.

In the summer of 2015 I had my first internship in Puerto Rico, where I was living my dream by working in the mornings and playing sand volleyball on the beach of Puerto Rico in the evenings, all because of my good friend and teammate Josue Rivera. Twice I visited a good friend of mine in Toronto, Canada over the summer when I had time to travel since we have no school and no pre-season. And now here I am, finding myself doing an internship in China for the next 5 weeks.

Looking back on my four years at BYU, I made amazing new friends, traveled a little bit more of the world, and got a great education. My next stop is Canada to get a Masters degree in Bachelor of Administration while playing for another 2 years at Thompson River University.

As I said, time flies when you have fun!