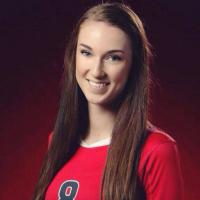 One year before graduating high school, I was wondering what I would want to do after. While I was scrolling through Facebook I found Sandra’s profile and I was interested immediately.

After filling out the paperwork I actually had the chance to meet Sandra in person at the German championships in Bremen. I was so nervous but as soon we got to talk I was relieved because I knew she would take good care of me.

I had no idea if I would actually have a chance to receive a scholarship but when Sandra told me that I do I was super happy. For me it was clear that I wanted to start out at a junior college because I liked that they were a little bit smaller and had a family atmosphere.

After making that decision I had to organize video material and coaches started to contact me. This whole process was really exciting and unexpectedly, I received a lot of offers. However, if you don’t really know anything about colleges in America or the state they are in, it can be difficult to decide where you want to go. I had offers from all over the place like Florida, Kansas, Louisiana, Colorado, Missouri… But then there was a tiny school in Wyoming that at first I couldn’t even find on Google Maps. The Head Coach, Shaun Pohlman, was very persistent in recruiting me and he actually was the one who made the little difference.

When I was arriving at the airport in Cody, Wyoming, I just thought “what the hell did I get myself into”, but it only took me a day to fall in love with this place and my new team.

The day after I arrived we had an open gym and because of the high evaluation it was super hard for me to breath. So it took me a little while to get used to the air and the different balls. In pre-season we had up to three practices a day, which at first was a little rough but once you get into the ice bath after, it’s all good.

My coach actually recruited me as a middle blocker but he put me on the right side right away, which I loved. In season we had our up and downs but as you all know, it all counts in November. At the region tournament we were able to beat the number five in the nation twice in a row 3:0. The highlight of the year was going to nationals where we finished 8th. In the second semester we had morning workouts three times a week and individuals/practice every day.

In my second year our team wanted to go even further at nationals. Still being the underdog in the nation we got to nationals by winning the region tournament again but this time it felt different. Nobody was really satisfied because we wanted more. At the national tournament we made it to the semi finals but unfortunately lost and placed 4th the next day. However our season was incredible and it allowed me to receive several individual awards which a lot of division 1 coaches noticed. I was also able to meet Sandra again at the national tournament. Our conversations were hilarious as always because we could never decide if we should talk in German or in English. The highlight of the tournament was being named to the National All Tournament Team which still seams a little bit unreal and I know I never would’ve achieved this accomplishment without my team.

My last semester at NWC was crazy and very stressful because I had to chose between almost 30 schools. After flying out to visit Appalachian State I fell in love with it right away. I chose this school because they have a lot of the same concepts that we had at NWC and they also had a great atmosphere in the team.

Despite volleyball, studying and speaking in a different language was really easy for me. NWC had great teachers and small classrooms so you actually get to know the teacher. All professors are really supportive, especially in season, because they just want you to succeed.

Right now I am sitting in my room back home in Germany and I am super excited to start my new chapter in North Carolina. So please, everybody that has the chance to get a scholarship to study and play in the United States: DO IT. You won’t regret it. I am truly grateful for everyone who made my two years at NWC so special.

A special thank you to my parents, who always support me, Sandra Brunke, who was always there for me and helped me through everything, and Shaun Pohlman, who always put up with my thousands of questions a day, and who changed my life. Now I am off to my next adventure.

PS: I would be happy to answer any questions you might have about studying and playing volleyball in the United States.