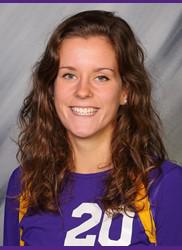 Going to college in the United States has always been my dream. Last year, that dream finally came true. I can’t believe it is already over and I am incredibly thankful for the experiences I got to make in one single year.

After High School I went to college in the Netherlands. During the third year of college I knew that if I still wanted to go to the U.S. some time, I had to do it then. So I decided to contact Sandra and we talked about the possibilities I had. Since I was in college already and I would complete my Bachelor’s degree that summer, I would only have one year of NCAA eligibility left, which was fine to me. One year to live and experience the American life.

In May last year I visited the university where I was going to spend the following year, the University of Northern Iowa (UNI). It was a hard decision, by the way, to decide where to go. At the end I let my feelings decide, which was the best thing I could have done. On the visit, I got to know the team and I chose my major, Kinesiology. It also helped me a lot to see where I was going to live.

In August the real journey started. The first two weeks of pre-season were really hard, but also good. When you don’t really know anyone at a new place, it is good to get to know people and be busy. We spent all day with the team, practicing and having team activities. They are so nice and everyone helped me really well with anything I needed help with. Volleyball in the U.S. is different than in Europe, I think. Sports are more intense. After pre-season, classes started and daily life began. I only had to go to class for two hours a day and I wasn’t too busy with homework, which was good, since we practiced every day and travelled a lot. Season went really well and we got to go to the NCAA tournament! Unfortunately we lost in the first round, but it was a really great team experience to go to the big dance. I enjoyed a semester full of volleyball and spending all my time with my teammates.

The second semester was completely different. Since I was a senior on the team and season was over, I didn’t practice and therefore didn’t spend a lot of time with the team any more. However, I made new friends through my classes and I also spent more time studying and doing homework, after I decided to try and finish my Master’s in one year. I met so many so nice people, again.

When I decided to go to UNI, I always thought about playing college volleyball. Looking back, I am thankful for living that dream, but I am even more thankful for having had the opportunity to make many more memories, which I never thought about before. I met so many nice people, who I will hopefully see again soon!