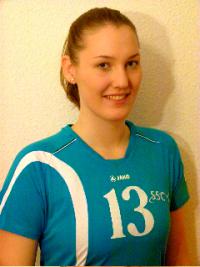 My last year of High School and I had no idea what I want to do afterwards. The only thing I knew was that I wanted to go abroad. Luckily, I met Sandra from VolleyUSA who told me about the possibility to play volleyball and study at the same time in the US. As soon as she said that my decision was made. There was a lot of paperwork to be done before getting the scholarship, but I handled it with Sandra’s help.

Then, in August, two months after graduating from High school I was packing my bags and flew to a new stage of life. Arriving in Houston, Texas, I got hit by the Texas heat. It felt like a sauna. A couple days later pre-season started. We had practice twice a day, scrimmages on the weekends, and CES which was hard but we got through it with ice baths and massages. After three weeks, our season and school started. Now, we only practiced once a day and mostly had games on the weekends. Being from Germany, it was totally new for me to fly to games when I used to take long bus trips. Our season was short (only 3 months), tense, and successful. At the end of October, the season was over and we had more time to concentrate on studying.

Coming to America, I didn’t know what to expect. It took me a couple of weeks to arrive, get used to Texas, and to acclimate. I got help from everybody, even from random people I met at Wal-Mart, but especially from my coach Tracie and my school adviser.

Now, at the end of my second semester, I can say that I’m used to the American lifestyle, the language, and the Tex-Mex-food. During spring break we had a tournament in Florida and visited Disney World. It was an amazing trip that I will never forget.

My team, the Lady Rebels, was like a big family for me which helped me get through my ups and downs. This year in Texas was an unforgettable experience which nobody can take from me. I know leaving home and flying across the world is a big step, but I only can recommend it to everybody because it is worth it.