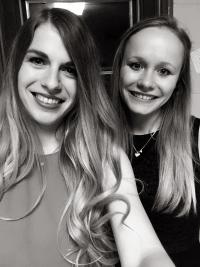 I, Vanessa, was pretty surprised when I got a message from Sandra after me and my team played at the Swiss Championships in spring 2015. Sandra encouraged me to fill out a chance evaluation and I gave it a shot. Shortly after, I got so thrilled about the idea of playing college volleyball in the USA that I knew this is what I wanted to do. So I did and Sandra helped me getting through the paperwork, tests, skype talks with coaches and everything else that needed to be done for this dream to come true.

I, Katharina, got really excited about the idea of playing college volleyball in the USA when former volleyball players of my team told me about it. From there on it was my dream to do the same thing they did. They recommended Sandra to me, so I filled out the chance evaluation and Sandra helped me to get through everything as Vanessa told you and my dream came true.

Our journey began on July 31, 2016. We, Vanessa from Switzerland and Katharina from Germany, met in Chicago and took the same plane to Wichita, where we were picked up by our two coaches and drove to Garden City, KS. Our excitement was overwhelming. We could not believe that this is real and we actually were in the middle of the USA to experience college volleyball.

The first two weeks during pre-season were intense. There was no time to think about something else than volleyball while we moved into our dorm room together, met hundreds of people, learned about the special flair of college life and got to know our incredibly motivated team. We practiced at least three times a day and sometimes we even had a swimming workout at 6 in the morning. Every single day, the coaches pushed us to our physical limits, which was necessary since the first conference games were taking place in less than one month.

The beginning of the season was overwhelming and super thrilling. It all began with getting dressed up in the morning so the other students could see that it is gameday. In the afternoon the preparation and warming up for the game started and the excitement was increasing slowly. More and more people entered the gym and our adrenaline level was rising. The Cheerleaders were ready and some of the boys painted their bodies in college colors. After the American national anthem all of the lights were turned off and music was played while the starting six were announced. During the game the crowd was cheering for us and we will never forget that special feeling on the court and being part of the team.

In addition to our conference games, we also drove to tournaments outside of Kansas. That way, we got to see other states like Texas, New Mexico, Wyoming, Colorado, Nebraska and Oklahoma. The long bus trips were exhausting but also unforgettable since we spent our time singing and watching movies together. Thanks to our amazing team, it never got boring.

Unfortunately, we had some bad luck, because in the second and third conference game two of our outside hitters got injured and they could not play for the entire year. This has weakened our team a lot since among them was our best and most reliable hitter.

Nevertheless, the season was very intense with at least two games a week, but also pretty short to what we were used to from Europe. We would have loved to have a longer season since everything we worked for so hard was already over by the end of October.

During winter break, Vanessa stayed at our host mom’s house, while Katharina flew back home to Germany for four weeks. It was nice having a comfortable bed again and getting more insight into the American way of celebrating holidays such as Christmas and New Year’s. Especially being woken up by the kids early on Christmas morning to open presents was not something I have been used to from home. Nevertheless, it was very interesting since I also got to watch the children’s Christmas program and meet our host mom’s family and friends.

As the second semester started we were both back on campus. The time flew by and our time in the USA was getting less and less. During spring season we continued practicing, but increased conditioning and weightlifting. In addition, we played a tournament in Dodge City and a scrimmage at home.

We are both very happy that we used the opportunity to go to America with a volleyball scholarship and it definitely was an unforgettable time. It is not just about the countless experiences and memories but also about getting more open-minded, learning about other cultures, growing up, becoming more independent and meeting wonderful people who will stay in our heart forever. Although America is far away, nowadays it is always possible to keep in touch and maybe organize visits.

Finally, another big thank you to Sandra! Thank you, for giving us the opportunity of playing college volleyball, improving our English and living in the USA with other people from a lot of different places. It is a totally different way of living and we were able to experience it first hand.

We already miss our teammates, coaches, athletic trainers, classmates, friends, professors and Garden City, a small town in the middle of the United States. “You never know what you had until it’s gone”. We will be following closely, wishing the best for this program and our teammates for their next season. So, if you ever have the opportunity, go for it! It won’t always be easy and there will be tough times but it is so worth it!