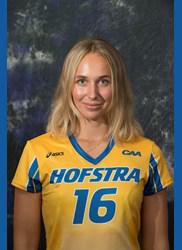 If someone had told me 6 years ago that one day I would live in New York, play D1 Volleyball and gain an excellent education at a top university I would have told him to dream on.

Now, I’m sitting here back in Berlin with an experience that will last a life time. Not only was it a great experience for playing volleyball but rather an amazing opportunity to grow as a person, learn about what it takes to be independent, and adjust to a fully new environment. Never had I thought that I could leave my family and friends and go on a journey for four years in America. However, through the awesome help of Sandra, the idea of going abroad became more and more visible and appealing. From a couple volleyball friends, I heard about that scholarship opportunity and became interest. At the same time, I reached out to Sandra Brunke from VolleyUSA. A quick evaluation survey and conversation with Sandra set the base for everything that lay ahead for me. Sandra leads not just an ordinary agency but rather gets to know each player she works with. We met and talked many times so she really learned what I like and dislike which was important in the recruitment process. She knew which schools, teams, and cities would fit to me based on our close relationship. Moreover, she was an essential help for all the paperwork, NCAA eligibility as well as the SAT and Toefl test. Without Sandra’s help I would have probably given up on all the confusing forms and papers. I am very thankful that I met Sandra who not only opened the doors to America but truly became a friend and important person in my life ?

Having a couple good offers from colleges around the country, my decision wasn’t easy. You have to think about where you really could see yourself living for four years. Do I love big cities or is a beach in front of me more tempting? Do I want to be in a highly successful team or is the academic status of a greater importance for me? Do I want to deal with a 9 hour time difference or only 6? In the end, I chose Hofstra University on Long Island, very close to New York City. Being from Berlin, I’m a city person but also love the beach. Thus, the school was the perfect trade off with a great academic level and the team had just won their conference championship.

Even if the start isn’t that easy, it doesn’t take long to get distracted. You don’t even have time to get homesick. With practices and school as well as being around great team mates you start to live your own life far away from home. Going to the U.S., I was shy, dependent on my family and not that self-confident. The four years turned me into the opposite for which I’m very grateful and what would have never happened if I had stayed in Berlin. One of the best parts are the many friendships you gain all across the world. My team was half international and the other half were Americans which led to many funny miscommunications and exchange of words and accents. In addition, I made close friends and already traveled to Brazil, Colombia and Miami to visit team mates that turns into friends. Due to the fact that everyone is far from home, you start to form a small family with your team and coaches. Playing volleyball in the States is for sure a bit different from home also because of some rule changes and tactics but the sport is celebrated much more than in Germany and Americans in general invest a lot in sports.

Now I’m sitting here back in Berlin as a total different person. I’m much more self-confident, outgoing, independent, stronger, and appreciate my family and friends from back home even more. Throughout all the years, Sandra always checked on me and offered help whenever needed. One moment I will never forget was in my second year as a sophomore. We had a pre-season tournament at my school and when I came into the gym I couldn’t believe my eyes when I saw Sandra in the stands. What a surprise that she came to visit me and Veronika (another German player from my team) without any notice! Since she stayed a couple days, Sandra and I walked the streets of New York City and it felt like a close friend from home had come to visit me. Now I can say that New York City became my second home where I will always have friends to visit and places that I can go back and remember the times.

Whoever thinks about taking the big step over to the U.S. should definitely do it! Make sure you chose a place where you could see yourself living for four years and then enjoy a once in a lifetime experience! It’s not always cupcakes and lollipops but everywhere there will be struggles, no matter if you live back home with your parents or in the dorms of an American college which is full of exciting moments that only a few get a chance to experience.

You cannot lose, you can only win. And as an athlete you only want to win, don’t you?